Items related to The Penguin Dictionary of Historical Slang (Penguin... 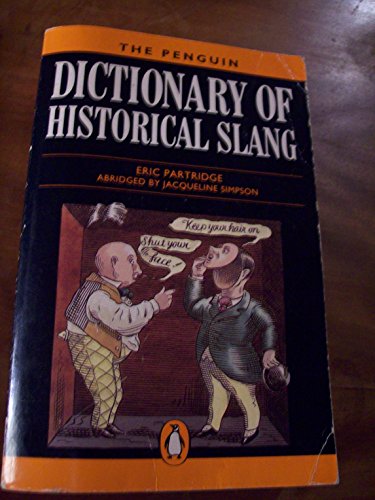 Nearly 50,000 entries recall the living speech of a world now largely lost. Often wry and flippant, occasionally "blue", and sometimes uproariously comical, they recapture the rich idiom of English life through the ages, bringing back to mind the vigour of Elizabethan phrase, the ribald language of dockside and pub, the richer coinages of messdeck and barrack, the euphemisms and witticisms of the Victorian drawing-room, and the irrepressible wit of errand boys and costermongers. The dictionary of slang and unconventional English was first published in 1937. Revised and enlarged editions appeared in 1938, 1949, 1951 and 1961. From the last of these, published in two volumes, this book has been compiled.

2. A Dictionary of Historical Slang