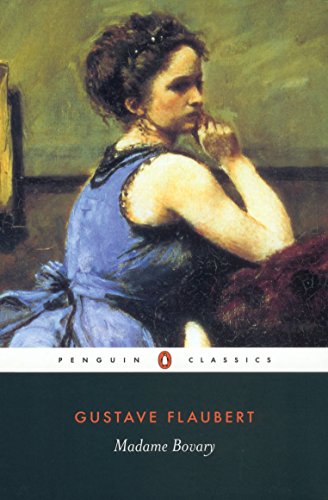 Gustave Flaubert's Madame Bovary is one of the most influential - and scandalous - novels of the nineteenth century. This Penguin Classics edition is translated with an introduction by Geoffrey Wall, with a preface by Michele Roberts.

Emma Bovary is beautiful and bored, trapped in her marriage to a mediocre doctor and stifled by the banality of provincial life. An ardent reader of sentimental novels, she longs for passion and seeks escape in fantasies of high romance, in voracious spending and, eventually, in adultery. But even her affairs bring her disappointment and the consequences are devastating. Flaubert's erotically charged and psychologically acute portrayal of Emma Bovary caused a moral outcry on its publication in 1857. It was deemed so lifelike that many women claimed they were the model for his heroine; but Flaubert insisted: 'Madame Bovary, c'est moi.'

Gustave Flaubert (1821-1880) was born in Rouen. After illness interrupted a career in law, he retired to live with his widowed mother and devote himself to writing. Madame Bovary won instant acclaim upon book publication in 1857, but Flaubert's frank display of adultery in bourgeois France saw him go on trial for immorality, only narrowly escaping conviction. Both Salammbo (1862) and The Sentimental Education (1869) were poorly received, and Flaubert achieved limited success in his own lifetime - but his fame and reputation grew steadily after his death.

If you enjoyed Madame Bovary you might also like Stendhal's The Red and the Black, also available in Penguin Classics.

'Its beauty is enchanting and terrible'
A.S. Byatt, author of Possession

'An extraordinarily innovative work: its style was at once ironic and lyrical, detached and passionate, ambiguous and precise'
Kate Summerscale

Flaubert's "Madame Bovary" scandalised French bourgeois society of the time with its shocking depiction of an adulteress, Emma Bovary, and her lascivious liaisons. The 19th-century press denounced both the book and its author as corrupting influences. History has exonerated Flaubert and exposed the hypocrisy of a society that would deny the existence of such women.

Emma Bovary, a young woman, newly married to a provincial doctor, is dazzled when she attends her first ball, attended by high aristocracy. With the culmination of her romantic ideals realised, her head is so filled with fanciful notions that she never re-enters reality, until the damning end:

Before her wedding day, she had thought she was in love; but since she lacked the happiness that should have come from that love, she must have been mistaken, she fancied. And Emma sought to find out exactly what was meant in real life by the words felicity, passion and rapture, which had seemed so fine on the pages of the books.

Frustrated and bored by her marriage, Emma embarks on a brief, rather touching affair with one young man but soon, vulnerable and exposed, she is fitting carrion for Monsieor Rodolphe, a serial womaniser. Soon, Emma has not only ruined her own reputation but destroyed that of her husband in her ruthless bid for wealth and recognition. The cast of characters, from passers-by to the shopkeepers who take her money, act like the chorus in a Greek tragedy. Seen through their eyes and their reactions to her, Emma's downfall is recounted but also society's intolerance.

On the surface, Flaubert provides a melodramatic morality tale. Slyly, underneath it all, he is laughing. Through his voyeuristic tale, with each salacious detail recounted, he is wilfully subversive as he points the finger not only at the guilty but at those who would dare to judge. --Nicola Perry

"Madame Bovary is like the railroad stations erected in its epoch: graceful, even floral, but cast of iron." -- John Updike

Book Description Paperback. Condition: New. Revised. Language: English. Brand new Book. 'A masterpiece' Julian BarnesFlaubert's erotically charged and psychologically acute portrayal of a married woman's affair caused a moral outcry on its publication in 1857. Its heroine, Emma Bovary, is stifled by provincial life as the wife of a doctor. An ardent devourer of sentimental novels, she seeks escape in fantasies of high romance, in voracious spending and, eventually, in adultery. But even her affairs bring her disappointment, and when real life continues to fail to live up to her romantic expectations, the consequences are devastating. It was deemed so lifelike that many women claimed they were the model for his heroine; but Flaubert insisted: 'Madame Bovary, c'est moi.'Translated with an Introduction and Notes by Geoffrey Wall With a Preface by Michele Roberts. Seller Inventory # AAZ9780140449129