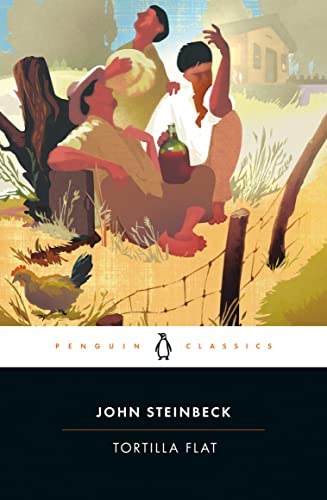 John Steinbeck knew and understood America and Americans better than any other writer of the twentieth century. (The Dallas Morning News) A man whose work was equal to the vast social themes that drove him. (Don DeLillo)" About the Author:

John Steinbeck (1902-68) is remembered as one of the greatest and best-loved American writers of the twentieth century. During the 1930s, his works included The Red Pony, Pastures of Heaven, Tortilla Flat, In Dubious Battle, and Of Mice and Men. The Grapes of Wrath, published in 1939, earned him a Pulitzer Prize. In 1962, he was awarded the Nobel Prize for Literature.

Book Description Paperback. Condition: New. Revised ed. Language: English. Brand new Book. Steinbeck is an artists; and he tells the stories of these lovable thieves and adulterers with a gentle and poetic purity of heart and of prose. --New York Herald TribuneA Penguin Classic Adopting the structure and themes of the Arthurian legend, John Steinbeck created a "Camelot" on a shabby hillside above the town of Monterey, California, and peopled it with a colorful band of knights. At the center of the tale is Danny, whose house, like Arthur's castle, becomes a gathering place for men looking for adventure, camaraderie, and a sense of belonging--men who fiercely resist the corrupting tide of honest toil and civil rectitude. As Nobel Prize winner Steinbeck chronicles their deeds--their multiple lovers, their wonderful brawls, their Rabelaisian wine-drinking--he spins a tale as compelling and ultimately as touched by sorrow as the famous legends of the Round Table, which inspired him. This edition features an introduction by Thomas Fensch. For more than seventy years, Penguin has been the leading publisher of classic literature in the English-speaking world. With more than 1,700 titles, Penguin Classics represents a global bookshelf of the best works throughout history and across genres and disciplines. Readers trust the series to provide authoritative texts enhanced by introductions and notes by distinguished scholars and contemporary authors, as well as up-to-date translations by award-winning translators. Seller Inventory # ABZ9780140187403

Book Description Paperback. Condition: new. Paperback. Today, nearly forty years after his death, Nobel Prize winner John Steinbeck remains one of America&#039;s greatest writers and cultural figures. We have begun publishing his many works for the first time as blackspine Penguin Classics featuring eye-catching, newly commissioned art. This season we continue with the seven spectacular and influential books &quot;East of Eden, Cannery Row, In Dubious Battle, The Long Valley, The Moon Is Down, The Pastures of Heaven,&quot; and &quot;Tortilla Flat.&quot; Penguin Classics is proud to present these seminal works to a new generation of readers?and to the many who revisit them again and again.&quot; Adopting the structure and themes of Arthurian legend, John Steinbeck creates a &quot;Camelot&quot; on a shabby hillside above Monterey on the California coast and peoples it with a colorful band of knights. As he chronicles the thoughts and emotions, temptations and lusts of the &quot;knights&quot;, Steinbeck spins a tale as compelling as the famous legends of the Round Table. Shipping may be from multiple locations in the US or from the UK, depending on stock availability. Seller Inventory # 9780140187403