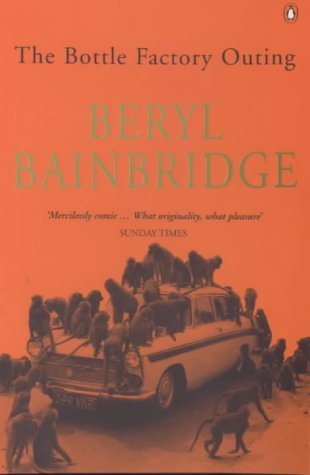 "'an outrageously funny and horrifying story' Graham Greene (Observer) 'After turning the final page of The Bottle Factory Outing, one can only gasp, and grope for the right word...Such an atmosphere of impending doom has not been created since Brighton Rock - except that Beryl Bainbridge is mercilessly comic instead of being mercilessly vicious. Specialising in successive denouements, and with her gift for collecting the most amazing detail, she is so in control of her marvellous little story that one hangs on her words from first to last. What originality, what pleasure.' Ronald Blythe (Sunday Times)"

Book Description Condition: Very Good. Shipped within 24 hours from our UK warehouse. Clean, undamaged book with no damage to pages and minimal wear to the cover. Spine still tight, in very good condition. Remember if you are not happy, you are covered by our 100% money back guarantee. Seller Inventory # 6545-9780140156966

Book Description Paperback. Condition: Used; Good. **Simply Brit** Shipped with Premium postal service within 24 hours from the UK with impressive delivery time. We have dispatched from our book depository; items of good condition to over ten million satisfied customers worldwide. We are committed to providing you with reliable and efficient service at all times. Seller Inventory # mon0001528818

Book Description Paperback. Condition: Used; Good. **SHIPPED FROM UK** We believe you will be completely satisfied with our quick and reliable service. All orders are dispatched as swiftly as possible! Buy with confidence!. Seller Inventory # mon0001448814

Book Description Paperback. Condition: Very Good. The Bottle Factory Outing This book is in very good condition and will be shipped within 24 hours of ordering. The cover may have some limited signs of wear but the pages are clean, intact and the spine remains undamaged. This book has clearly been well maintained and looked after thus far. Money back guarantee if you are not satisfied. See all our books here, order more than 1 book and get discounted shipping. Seller Inventory # 7719-9780140156966

Book Description Paperback. Condition: Very Good. Contains five short stories by Beryl Bainbridge, including The Bottle Factory Outing. The book has been read, but is in excellent condition. Pages are intact and not marred by notes or highlighting. The spine remains undamaged. Seller Inventory # GOR001248979