Items related to Minds, Brains And Science: The 1984 Reith Lectures... 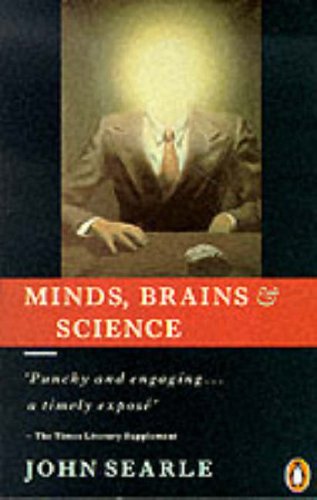 What is the relation between mind and brain, can computers think and has the problem of the freedom of the will been resolved? In addressing these questions, this book discusses the place of mind in science.

John Searle's six Reith lectures--brief talks given over the BBC--are popular philosophy in the best sense: clear and lively without loss of rigor, and on problems of wide appeal. Searle proposes answers to three related questions: the relation between mind and brain; whether computers can think (they cannot); and why, compared with the natural sciences, the social sciences have taught us so little. On the second two issues he is brilliant...Searle makes a resounding contribution to current debates.

Chomsky, the champion of modern linguistics; Jacques Derrida, the heavyweight of post structuralism; and endeavored to deal a knock-out blow to the pretensions of artificial intelligentsia.

Wittgenstein once remarked that a philosopher who doesn't engage in public debate is like a boxer who never enters the ring. By this standard, John Searle is a true prizefighter. In recent years he has taken on Noam Chomsky, the champion of modern linguistics; Jacques Derrida, the heavyweight of post structuralism; and endeavored to deal a knock-out blow to the pretensions of artificial intelligentsia.--Trevor Pateman "Times Higher Education Supplement "

In print Professor Searle's lectures retain the same punchy and engaging style as they had on the air.--David Papineau "Times Literary Supplement "

Searle's book is an admirably clear and vigorous exposition of his views on a connected set of philosophical issues of importance and timeliness.--John Perry

This book is aggressive, zealous, and acute. Searle's manner is that of a plain man in possession of plain truths that no one can reject if they are plainly enough stated. I cannot think of another book quite like it.--Arthur Danto

John R. Searle is Willis S. and Marion Slusser Professor Emeritus of Philosophy at the University of California, Berkeley.

Book Description Penguin Books Ltd, 1992. Paperback. Condition: Used; Good. **Simply Brit** Shipped with Premium postal service within 24 hours from the UK with impressive delivery time. We have dispatched from our book depository; items of good condition to over ten million satisfied customers worldwide. We are committed to providing you with reliable and efficient service at all times. Seller Inventory # 1084856

Book Description Penguin, 1992. Paperback. Condition: Good. All orders are dispatched the following working day from our UK warehouse. Established in 2004, we have over 500,000 books in stock. No quibble refund if not completely satisfied. Seller Inventory # mon0004698343

Book Description Paperback. Condition: Good. The book has been read but remains in clean condition. All pages are intact and the cover is intact. Some minor wear to the spine. Seller Inventory # GOR001373644

Book Description Paperback. Condition: Very Good. The book has been read, but is in excellent condition. Pages are intact and not marred by notes or highlighting. The spine remains undamaged. Seller Inventory # GOR001700009

Book Description -. Paperback. Condition: Very Good. Minds, Brains and Science: The 1984 Reith Lectures (Penguin philosophy) This book is in very good condition and will be shipped within 24 hours of ordering. The cover may have some limited signs of wear but the pages are clean, intact and the spine remains undamaged. This book has clearly been well maintained and looked after thus far. Money back guarantee if you are not satisfied. See all our books here, order more than 1 book and get discounted shipping. Seller Inventory # 7719-9780140156881

Book Description Penguin 27/02/1992, 1992. Condition: Very Good. Shipped within 24 hours from our UK warehouse. Clean, undamaged book with no damage to pages and minimal wear to the cover. Spine still tight, in very good condition. Remember if you are not happy, you are covered by our 100% money back guarantee. Seller Inventory # 6545-9780140156881

Book Description Paperback. Condition: Fair. A readable copy of the book which may include some defects such as highlighting and notes. Cover and pages may be creased and show discolouration. Seller Inventory # GOR001851108