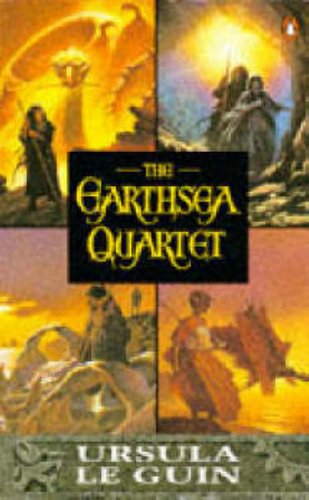 A superb four-part fantasy, comparable with the work of Tolkien and C.S. Lewis, the Earthsea books follow the fortunes of the wizard Ged from his childhood to an age where magic is giving way to evil.

As a young dragonlord, Ged, whose use-name is Sparrowhawk, is sent to the island of Roke to learn the true way of magic. A natural magician, Ged becomes an Archmage and helps the High Priestess Tenar escape from the labyrinth of darkness. But as the years pass, true magic and ancient ways are forced to submit to the powers of evil and death ...

Ursula Le Guin was born in Berkley, California, in 1929, daughter of the writer Theodora Krober and the anthropologist Alfred Krober. Her published work includes twenty-one novels, eleven volumes of short stories, three collections of essays, twelve books for children, six volumes of poetry and four of translation. Among her novels are the The Left Hand of Darkness and The Dispossessed, both winners of the Nebula and Hugo awards, Always Coming Home, winner of the 1985 Kafka Award, and Four Ways to Forgiveness. In 2009 she won her sixth Nebula award for Powers.

Penguin/Puffin published the first volume of the Earthsea books, A Wizard of Earthsea, in 1971. The Earthsea books have been translated into many languages around the world and are global bestsellers.

1. The Earthsea Quartet : A Wizard of Earthsea; the Tombs of Atuan; the Farthest Shore; Tehanu