Items related to To The Lighthouse (Vintage Classics)

To The Lighthouse (Vintage Classics) 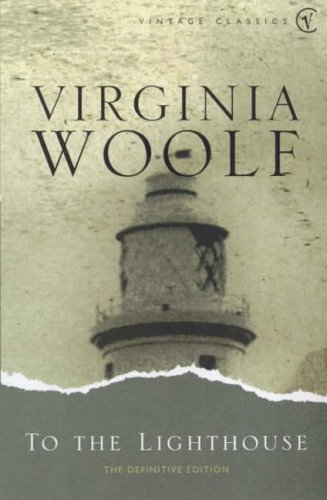 One of the greatest literary achievements of the twentieth century. TO THE LIGHTHOUSE is Virginia Woolf's most popular novel. This definitive edition introduced by Quentin Bell contains the original Hogarth Press text as overseen by the author, and a list of the textual variants that appeared during her lifetime. The serene and maternal Mrs Ramsay, the tragic yet absurd Mr Ramsay together with their children and assorted guests are holidaying on the Isle of Skye. From the seemingly trivial postponement of a visit to a nearby lighthouse Virginia Woolf constructs a remarkable and moving examination of the complex tensions and allegiances of family life, and the conflict between male and female principles.

Mrs Ramsay (wife of a distinguished philosopher, mother of eight, and a sympathetic hostess) provides the heartbeat of a shabby-grand holiday house in the Hebrides and at the same time ceaselessly gauges the secret rhythms of its many intertwined pulses. Hers is the dominant interior monologue of this pre-first-world-war interlude. Other voices (most notably that of unmarried artist Lily Briscoe) fade in and out, and Juliet Stevenson turns this haunting story, in which nothing really happens, into a tone-poem of delicately nuanced probings into human relationships. The mood deepens when the neglected house is revisited, post-war, by surviving members of the holiday party, who must ultimately confront 'that loneliness that was the truth about things'. --Karen Robinson, The Sunday Times

Nicole Kidman in The Hours may have raised the doyenne of Bloomsbury bluestockings literary profile for a new generation of readers, but many people still consider Virginia Woolf's writing difficult and dated. It is. You either go along with descriptions such as, 'the spring, without a leaf to toss, bare and bright like a virgin fierce in her chastity, scornful in her purity, was laid out on fields, wide-eyed and watchful, and entirely careless of what was done, or thought, by the beholders...', or you don't. Somehow, though, when it is read in a voice as sensitive and intelligent as Juliet Stevenson's, you appreciate why critics have said that this, her best-known novel, contains some of the most beautiful prose ever written. Just as well, because there isn't much plot. The action, such as it is, takes place in the holiday home of the Ramsay family, on a Hebridean island before and after the great war. Mrs Ramsay is beautiful, Mr Ramsay difficult, their eight children relatively interesting, their house guests more so. It's the relationships that count, constantly shifting and elusive, dependent on a glance, a trick of light, an inflection of tone. Naxos does an abridged version, but don t be tempted. Woolf is all or nothing. --Sue Arnold, The Guardian

Thinking about my own reaction to To the Lighthouse, I enjoyed it more because of Juliet Stevenson's reading of it. She carried me along in the middle section when I was losing my way. And then I got fired up for it again. What the audiobook did was to impose some additional (and quite helpful) structure on the book. For example the last four tracks are called In the boat, Perspective, Approaching and Arriving. --Pete, Couch trip blog

1. To The Lighthouse (Vintage Classics) Woolf, Virginia and Boland, Eavan

2. To the Lighthouse (Vintage Classics)

3. To the Lighthouse (Vintage Classics)

Book Description Paperback. Condition: Good. All orders are dispatched the following working day from our UK warehouse. Established in 2004, we have over 500,000 books in stock. No quibble refund if not completely satisfied. Seller Inventory # mon0004912457

4. To The Lighthouse (Vintage Classics)

5. To The Lighthouse (Vintage Classics)

Book Description Condition: Very Good. This book is in very good condition and will be shipped within 24 hours of ordering. The cover may have some limited signs of wear but the pages are clean, intact and the spine remains undamaged. This book has clearly been well maintained and looked after thus far. Money back guarantee if you are not satisfied. See all our books here, order more than 1 book and get discounted shipping. . Seller Inventory # 7719-9780099982104

6. To The Lighthouse (Vintage Classics)

Book Description Condition: Very Good. Shipped within 24 hours from our UK warehouse. Clean, undamaged book with no damage to pages and minimal wear to the cover. Spine still tight, in very good condition. Remember if you are not happy, you are covered by our 100% money back guarantee. Seller Inventory # 6545-9780099982104

7. To the Lighthouse (Vintage classics)

Book Description Paperback. Condition: Used; Good. **Simply Brit** Shipped with Premium postal service within 24 hours from the UK with impressive delivery time. We have dispatched from our book depository; items of good condition to over ten million satisfied customers worldwide. We are committed to providing you with reliable and efficient service at all times. Seller Inventory # BB00004891B

8. To the Lighthouse (Vintage classics)

Book Description Paperback. Condition: Used; Good. stains on the side **SHIPPED FROM UK** We believe you will be completely satisfied with our quick and reliable service. All orders are dispatched as swiftly as possible! Buy with confidence!. Seller Inventory # 4032490

9. To The Lighthouse The Definitive Edition

Book Description Paperback. Condition: Very Good-. Reprint; Third Printing. Some staining to top of spine. ; Nice tight copy, no names inside, appears unread. Cover artwork by Marion Deuchars. ; 224 pages; The author's most popular novel and seen as one of the grear literary achievements of the twentieth century. A family holiday on Skye forms the setting for this lyrical novel. This definitive edition introduced by Quentin Bell contains the original Hogarth Press text as overseen by the author, and a list of the textual variants that appeared during her lifetime. Seller Inventory # 32021

10. To The Lighthouse (Vintage Classics)

Book Description Condition: Good. Your purchase helps support Sri Lankan Children's Charity 'The Rainbow Centre'. Ex-library, so some stamps and wear, but in good overall condition. Our donations to The Rainbow Centre have helped provide an education and a safe haven to hundreds of children who live in appalling conditions. Seller Inventory # Z1-H-014-01988