Items related to A Case Of Need

Crichton, Michael A Case Of Need

A Case Of Need 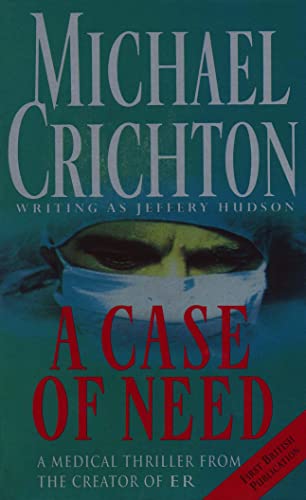 Was it murder? Was it horribly botched surgery - accidental malpractice? Was someone in the great Boston medical centre -violating the Hippocratic oath? No one knows exactly. . . Only one doctor is willing to push his way through the mysterious maze of hidden medical data and shocking secrets to learn the truth. This explosive medical thriller is vintage Michael Crichton - with the breathtaking blend of riveting suspense and authentic medical detail that has made him one of today's most fascinating writers.

Michael Crichton was the #1 New York Times bestselling author of the groundbreaking novels The Andromeda Strain, The Great Train Robbery, Jurassic Park, Disclosure, Prey, State of Fear, Timeline, Sphere, and Congo, among many others. His books have sold more than 200 million copies worldwide, have been translated into thirty-eight languages, and have provided the basis for fifteen feature films. He was the director of the films Westworld, Coma, The Great Train Robbery, and Looker, as well as the creator of the television series ER. Crichton remains the only writer to have a number one book, movie, and TV show in the same year. He died in 2008.