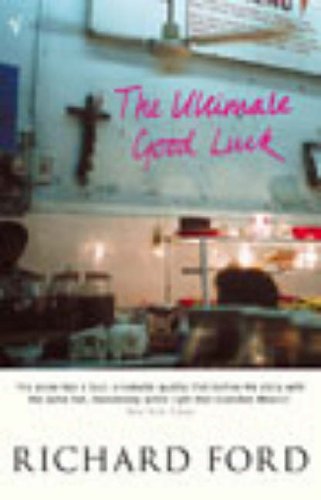 An atmospheric thriller of menace, eroticism, and psychological revelation. Harry Quinn and his girlfriend Rae head to Oaxaca, Mexico to spring Rae's brother Sonny from jail and protect him from the sinister drug dealer he is suspected of having double-crossed. But instead of a simple jail-break, Harry and Rae fall into a nightmarish series of entanglements with ex-pat whores and mute Zapotec Indians. The Cocaine Era's answer to Graham Greene, this exquisitely choreographed novel tracks Rae's and Harry's inexorable descent into the Mexican underworld, where only a stroke of ultimate good luck can keep them alive.

Richard Ford was born in Jackson, Mississippi, in 1944. He has published five novels and two previous collections of stories. His novel, Independence Day was awarded the Pulitzer Prize and, two weeks later, the PEN/Faulkner award for Fiction, the first time the same book has won both prizes.

Book Description Condition: Very Good. Used book that is in excellent condition. May show signs of wear or have minor defects. Seller Inventory # 38783698-6

Book Description Paperback. Condition: Very Good. Shipped within 24 hours from our UK warehouse. Clean, undamaged book with no damage to pages and minimal wear to the cover. Spine still tight, in very good condition. Remember if you are not happy, you are covered by our 100% money back guarantee. Seller Inventory # 6545-9780099448952

Book Description Paperback. Condition: Very Good. The Ultimate Good Luck This book is in very good condition and will be shipped within 24 hours of ordering. The cover may have some limited signs of wear but the pages are clean, intact and the spine remains undamaged. This book has clearly been well maintained and looked after thus far. Money back guarantee if you are not satisfied. See all our books here, order more than 1 book and get discounted shipping. Seller Inventory # 7719-9780099448952