Items related to The Madolescents 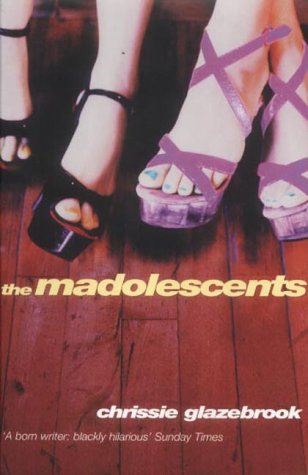 Living in a Newcastle suburb on a steady diet of Bailey's and chips, Rowena Vincent fantasizes about her absent father and the elimination of her mother's new boyfriend. When it becomes obvious she is losing her grip on reality, she is packed off to a teenage therapy group. Meet the Madolescents.

The heroine of Chrissie Glazebrook's debut novel, The Madolescents, is a 16-year-old misfit called Rowena, living with her mum and her mum's mega-gross lover Filthy Luker in poorish urban northern England. It is, in Rowena's inimitable voice (effortlessly and splendidly captured by Glazebrook), a situation fit to send anyone "friggin mentally ill", and it duly tips the already nervy, highly-strung adolescent into a genuine bid for lunacy. As a consequence she is then stabled among a bunch of other maladjusted youngsters for the purposes of group therapy--the Madolescents of the title.

What happens to and between the Madolescents is the ostensible subject of this book, and Glazebrook sketches their doings neatly. But it's really the cynical, robust, fragile, sassy character of Rowena herself that shines through and makes the novel work. For in all her tacky teen heroism and self-loathing loveliness she is nothing less than a Catcher in the Rye in black nail varnish and flip flops.

"The spot on my chin's grown into a huge bubo because I tried to squeeze it before it had a proper head!".
"I AM ROWENA. WARRIOR PRINCESS. I am invincible. I think my period's started".
"I heard this squelchy noise coming from Mum's bedroom, it sounded like baby Maggie from The Simpsons sucking her dummy. It was them--doing it!".

These three quotes from a possible infinitude give a good idea of what this novel's like: funny, acerbic, vulgar, smart, likeable, earthy and winningly demotic. --Sean Thomas From the Publisher:

Madness, morticians and a large portion of chips.