Items related to In the Cellar 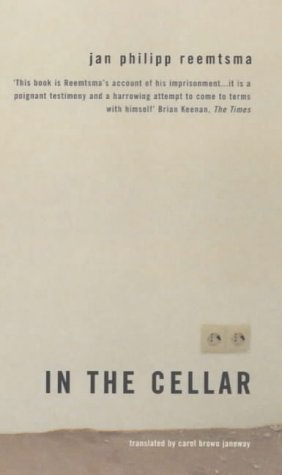 Jan Philipp Reemtsma inherited Germany's largest tobacco fortune. His research into Germany's role in the 20th century has made him the focus for hate groups. On 25 March 1996 he was beaten and abducted from outside his house. This is the story of his 33 days' captivity, chained in a cellar.

On March 25, 1996, Jan Philipp Reemtsma, as was his usual custom, made his way to his second house at the other end of the road to see to some work. He was not to return to his wife and son for another 33 days, which most definitely was not his usual custom. In fact, in many ways it seems he never did return; before he could open the door he was set upon by two masked men who after a brief struggle spirited him away to captivity in a cellar for the best part of five weeks. Their reasoning was simple; Reemtsma, a phenomenally rich German tobacco heir was an easy ransom subject, not least, they thought, because a man who has not had to work for his money will part with it far more easily than one who has.

The kidnappers did eventually succeed in extorting DM30 million, and Reemtsma was returned, basically physically unharmed, to his family. Yet what occurred in the mind and soul of the man during this short period, as related here in this remarkably matter-of-fact, unmawkish self-examination, can never be set right, never fully come to terms with. As he observes: "Where is the dividing line between enduring and not enduring?" There is none; how could he know what would have occurred to signify that he was no longer enduring? His reality became a small room with no natural light, a chain around his ankle, a complete reliance on his captors; separated from the world, "fallen off" as he would say, how could he make these judgements, even looking back to the experience from "normality"?

This is no gory sensationalist account, though it is remarkably gripping in the telling; no flippant attempt to cash in on an experience that entered the public domain and was described, without a hint of irony, as a "deluxe kidnapping". It is a plain and forthright story of a horrifically unnerving psychological experience, one in which the reader could not wish for greater honesty--Reemtsma is not afraid of his shameful thoughts, feels no need to embellish his actions with some retrospective machismo in the telling, and does not claim to remember every detail with clarity; indeed, quite the opposite is true. A brilliant intellectual, he is the founder of the Hamburg Institute for Social Research, and one can't help feeling at points that this very intellectualism has not helped him in his own attempt to come to terms with the experience .As he himself says, the story "acquires something soothing in the telling that was utterly lacking in reality", and there is something soothing about this book. But it is also painfully unsettling as he struggles to convey feelings that can only fall under the "inadequate heading of fear". This is a remarkable document, but one that, like his own experience, defies simple classification and definition.--Alisdair Bowles

Book Description Paperback. Condition: Very Good. The book has been read, but is in excellent condition. Pages are intact and not marred by notes or highlighting. The spine remains undamaged. Seller Inventory # GOR004521599