Items related to Archimedes And The Fulcrum (Big Idea)

Archimedes And The Fulcrum (Big Idea) 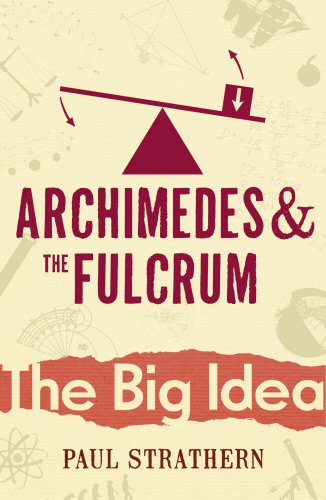 At a moment of great discovery, one Big Idea can change the world...

The greatest mathematician of his time, Archimedes transformed the development of early maths. But it is his revolutionary insights into mechanical science for which he is so revered, inventing the fulcrum and lever, pulley and water pump, among other technological advances that changed the course of history.

Archimedes & the Fulcrum is a captivating and easily digestible investigation into the legendary life and work of the greatest mathematical mind the world had seen, up until his tragic death at the hands of the Romans. Single-handedly launching a 4,000 ton ship, calculating volumes and perfect spirals, laying the foundations of theoretical physics and inventing military weaponry as a seventy-year-old, Archimedes' Big Idea was so much more than his famed leap from his bath, shouting 'Eureka!'

The Big Idea series is a fascinating look at the greatest advances in our scientific history, and at the men and women who made these fundamental breakthroughs.

THE BIG IDEA is a hugely popular series of science books that, at only 96 pages each, are an accessible read for the amateur

Paul Strathern was born in London and studied philosophy at Trinity College, Dublin. He was a lecturer at Kingston University where he taught philosophy and mathematics. He is a Somerset Maugham prize-winning novelist of A Season in Abyssinia, as well as four other novels. He is also the author of the Philosophers in 90 Minutes series.He wrote Mendeleyev's Dream which was shortlisted for the Aventis Science Book Prize, Dr. Strangelove's Game: A History of Economic Genius, The Medici: Godfathers of the Renaissance, Napoleon in Egypt and most recently, The Artist, The Philosopher and The Warrior, which details the convergence of three of Renaissance Italy's most brilliant minds: Leonardo Da Vinci, Niccolo Machiavelli and Cesare Borgia. He lives in London and has three grandchildren.

2. ARCHIMEDES AND THE FULCRUM (BIG

3. Archimedes and the Fulcrum (Big Idea)