Items related to Bears Can't Run Downhill: and 200 other dubious... 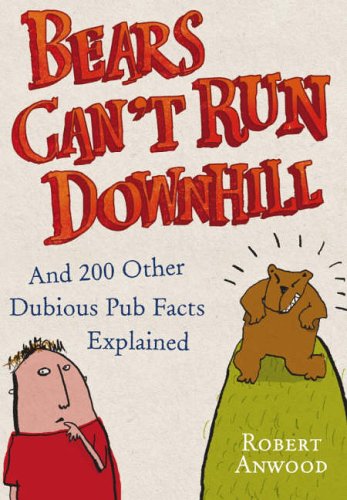 Explains 201 common claims and popular misconceptions. This work is intended for the quiz fanatic, the trivia buff, the show-off down the pub - or the wife or girlfriend who wants a way to get the upper hand.

Fact, fiction and everything in between: 201 ludicrous claims, half-baked theories and fascinating titbits explained

Ever wondered whether Bob Holness really did play the saxophone solo on Gerry Rafferty's Baker Street? Or whether a swan can break a man's arm? Or whether computer games are illegal in Greece?! If so, you've probably spent far too much time down the pub, conversing with a mate on the wrong end of four pints of lager. We've all heard them: wild claims, spurious rumours and barely believable 'pub facts'. Don't pretend you've never wondered whether a crocodile really can run faster than a racehorse. Or pondered the possibility that there is only one cash machine in the whole of Albania? If this sort of thing keeps you awake at night, then this book has come to the rescue. Bears Can't Run Downhill...debunks and explains 201 common claims and popular misconceptions. It?s the ideal stocking-filler for the quiz fanatic, the trivia buff, the show-off down the pub ? or the wife or girlfriend who wants a way to a) get the upper hand and b) put a stop to this nonsense once and for all. So here is the definitive tome ? all you will never need (until the sequel at least) - of well-known ?facts? both true and apocryphal.