Items related to Crossing the Boundary 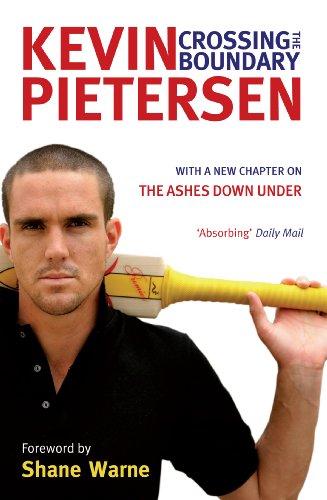 Described by the media as 'the David Beckham of cricket', Kevin has become the poster boy for English cricket. But he is also in possession of a prodigious talent - fearless, bold and with unflappable nerves. His unique batting style has produced hundreds of runs and many outstanding innings, culminating in his extraordinary triumph at the 2005 Ashes. Yet with the highs, come the lows, and he gives his version of events during the 2006/07 Ashes when England were defeated by Australia.

Crossing the Boundary recounts Kevin's remarkable journey so far - from growing up in his native South Africa and the opposition he faced from the national cricket board; his move to England and burgeoning career at Hampshire to winning a place on the England team. It provides a rare insight into the mind of an international cricketer, on and off the pitch. Reflecting his youthful charisma and his bullish confidence, this is a sporting memoir like no other.

Full of personal anecdotes and insight from numerous sporting legends such as Shane Warne, Ian Botham, and Nasser Hussain, this is the riveting story of one of the most significant cricketers of our time.

"Pietersen is a belligerent individual. He is cocky and confident; there is a touch of arrogance about him. I love it" (Geoffrey Boycott)

"The man has so much belief and so much quality ... Pietersen is a match-winner ... The man is a champion and was there when he was most needed" (Nasser Hussain)

"He has got a little bit of genius in him because he can play an extraordinary innings. He has a positive attitude and lots of steel" (Michael Vaughan)

Crossing the Boundary: The Early Years in My Cricketing Life

Book Description Condition: New. Dieser Artikel ist ein Print on Demand Artikel und wird nach Ihrer Bestellung fuer Sie gedruckt. Yet with the highs, come the lows, and he gives his version of events during the 2006/07 Ashes when England were defeated by Australia. Crossing the Boundary recounts Kevin\ s remarkable journey so far - from growing up in his native South Africa and the . Seller Inventory # 594348526