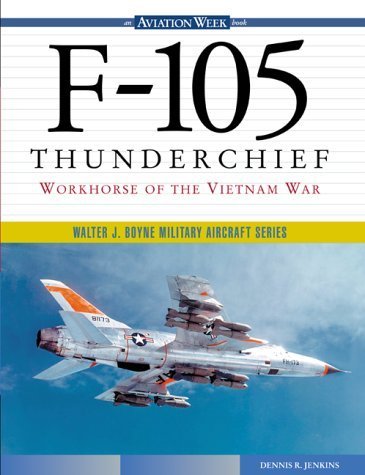 The eye-opening insider's look at the first aircraft developed for small nuclear weapons delivery--with technical facts, never-before-seen photos, and first-person accounts. Chronicles the bomber's evolution, starting with its initial purpose of meeting the demand for small thermonuclear weaponry capable of penetrating Soviet defenses. Covers the F-105's many phototypes, its pivotal role in Vietnam (where it flew over 75% of missions and earned its nickname "Thud" due to its staggering crash rate), and its modified capability of hunting surface-to-air missiles (SAMs).

Called "Thud," for the sound it made when striking the ground, the F-105 Thunderchief was innocent in its own all-too-frequent mortality. Instead, the fault lay in its worthy design and engineering, the cause of its selection to conduct 75% of America's bombing strikes during the Vietnam conflict.

During that war, F-105s flew more than 20,000 bombing raids over Southeast Asia, many against heavily defended enemy territory. A mountain range outside Hanoi became known as "Thud Ridge" for the number of F-105s shot down there while attempting to cross it.

The F-105's capabilities also made it a top choice for "Wild Weasel" hunter-killer teams sent to destroy North Vietnamese surface-to-air missile sites. On these perilous missions, F-105s presented themselves as targets to draw live SAM fire. Hidden launchers could then be destroyed before they struck down other American flyers if the team was lucky. As hair-raising as their name, "Wild Weasels" too often failed to evade the deadly missiles they sought.

Packed with photos, including an 8-page color spread, many never before published, plus in-depth technical details and personal reminiscences of veterans who flew the F-105, this superb addition to any aviation enthusiast's library brings readers the most detailed, authoritative portrait of the F-105 Thunderchief ever published. Written by veteran aviation author/engineer Dennis R. Jenkins, F-105 Thunderchief offers an insider's look at this powerful warplane, complete with little-known avionics and armaments details.

With unforgettable stories of heroic missions, men at war, and a behind-the-scenes guided tour of the plane's dramatic development, F-105 Thunderchief is the most complete reference to the F-105 ever written and a thrilling look into the vast, complex task of creating a modern warplane.

-Expert reporting on flight and lab testing, parts and systems glitches and solutions, and modifications for various uses.

-Records of combat missions, including details on F-105s lost over Southeast Asia.

-Detailed account of changes that transformed the F-105 from a Cold War nuclear sentry into a active combatant in a bloody war.

Call it the "Lead Sled, "Ultra Hog," "Squash Bomber," or "Drop Forged by Republic Aviation." But don't call it "Thud" unless you've flown it. That's the word from proud pilots of the F-105 Thunderchief.

f the total 753 F-105D/Fs manufactured by Republic, 393 were lost to various causes over Southeast Asia. The aircraft's familiar nickname refers to the sound of an F-105 smacking into the earth. In 1966 alone, 124 F-105s plummeted from the sky, many of them onto "Thud Ridge," an infamous mountain range bristling with antiaircraft armaments just outside Hanoi.

The F-105 was invented with finer things in mind. Commissioned by the Air Force as a tactical nuclear bomber, it was to stand sentry at temperate, well-tended bases in Europe and Japan. In the Cold War days of the 1950s, its designers envisioned it poised to strike against the Evil Empire of the Soviet Union, should the need ever arise.

Instead, the F-105 found itself in the hot and humid jungles of Southeast Asia, not a deterrent to war, but an active participant. "The F-105 gained its fame in the skies over Southeast Asia, carrying weapons it was not designed to use in a war it was not supposed to fight," writes author Dennis R. Jenkins, respected aviation writer and engineer.

In Jenkins' F-105 Thunderchief, you'll read accounts of many of the plane's heroic missions in Vietnam, including a run in which an F-105 endured a SAM hit, 87 holes, and the wounding of the pilot in hand and leg. Despite these handicaps, it refueled in midair and limped safely back to base.

F-105 Thunderchief details both the peacetime development of the massive fighter-bomber and its combat history. You'll watch engineers struggle to overcome the many technical problems in warplane design, and you'll be aboard the newborn F-105's first test flight at Edwards Air Force Base when the right landing gear popped out aloft, necessitating a hard landing.

You'll follow every step as military staff and civilian contractors worked together to make this complex warcraft reliable and safe. Still, the fully developed but highly complex F-105 required between 35 and 100 hours of ground maintenance for every combat hour in the air.

Though less agile than the North Vietnamese's Soviet-made MiGs, F-105s brought down nearly 30 MiG fighters during the conflict. A single F-105 downed three MiGs in separate incidents, one by dropping its bomb payload into the approaching MiG's path.

Not a single F-105 is flying today, though museums showcase 45 of them. But in F-105 Thunderchief, this classic warplane returns to the skies and soars again, bringing with it the brave crewmen and dedicated teams that launched and kept it in the air.

Dennis R. Jenkins has been a senior engineer/manager in the aerospace industry for more than 20 years. For corporations such as Lockheed Martin, he has worked on projects that included the Space Shuttle, the Ballistic Missile Early Warning System, X-33/VentureStar, and the National Airspace System (FAA). The author of several books on air- and spacecraft, including B-1 Lancer, and F/A-18 Hornet, other volumes in the Walter J. Boyne Military Aircraft Series, he has degrees in both computer engineering and R&D systems management.