Items related to Zlateh the Goat 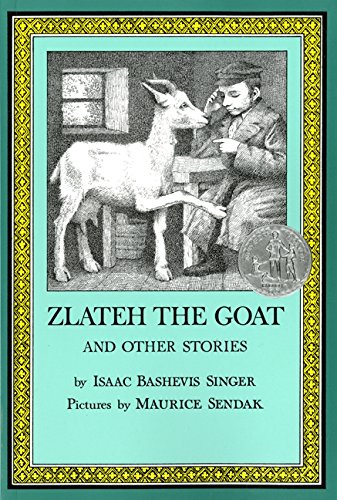 Chelm is a village of fools. The most famous fools - the oldest and the greatest - are the seven Elders. But there are lesser fools too: a silly irresponsible bridgegroom; four sisters who mix up their feet in bed one night; a young man who images himself dead. Here are seven magical folktales, spun by a master storyteller, that speaks of fools, devils, shlemiels, and even heroes - like Zlateh the goat.

"Singer and Sendak for all ages -- how simple, how perfect! The first, 'Fool's Paradise, ' and the last, the title story, are masterpieces."--" The Kirkus Reviews""Beautiful stories for children, written by a master."--" The New York Times""Timeless tales with their subtle wisdom and universal appeal. Perfect read -- aloud fare for families."--" Parents' Magazine

Isaac Bashevis Singer was one of the last great Yiddish authors and received world acclaim for his rich and haunting novels of Jewish life and folklore. In 1978, he received the Nobel Prize for Literature. He was also the recipient of two National Book Awards and three Newbery Honor Awards. Zlateh the Goat, a 1967 Newbery Honor Book, was his first book for children.

1. Zlateh the Goat and Other Stories

2. Zlateh the Goat and Other Stories

3. Zlateh the Goat and Other Stories

4. Zlateh the Goat and Other Stories

5. ZLATEH THE GOAT AND OTHER STORIE