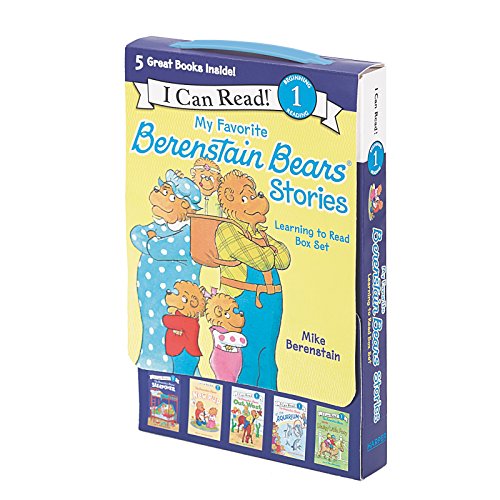 Five fun I Can Read adventures in one sturdy box!

With a plastic carry-along handle and Velcro closure, this Berenstain Bears box set of Level 1 I Can Reads is packed with entertaining, easy-to-read stories. Follow the Bear family as they have their first sleepover, take a trip to the aquarium, go out West, and more.

Great for young readers who are on the go too, whether on vacation trips or back and forth to camp or school.

All of the books in this set are Level One I Can Read books, which means they are perfect for children learning to sound out words and sentences.

Since their inception, the Berenstain Bears stories have expanded to include picture books, beginning readers, and chapter books--even a hit TV show on PBS. Writing and illustrating the books has become a Berenstain family affair. Mike joined with his parents as a creative team in the late 1980s. The Bear family has expanded over the years as well. Sister Bear arrived in 1974, and baby Honey joined the family in 2000.

Since Stan's death at age eighty-two in 2005, Jan and Mike have continued to write and illustrate wonderful new adventures for Mama, Papa, Brother, Sister, and Honey Bear. They live in Bucks County, Pennsylvania, which looks a lot like Bear Country.