Items related to The Tibetan Book of Living and Dying: The Spiritual... 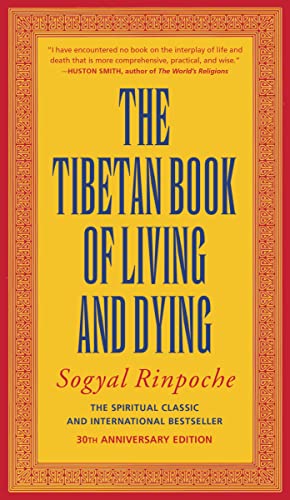 With more than 100,000 copies sold in hardcover, exuberant reviewer attention, and translation into eleven different languages, this jewel of Tibetan wisdom is the definitive new spiritual classic.

"Sogyal Rinpoche...has delivered the Tibetanequivalent of 'The Divine Comedy.' One could imaginethat this is what Dante might have written had he beena Buddhist metaphysician rather than a Christian poet." --"New York Times Book Review"Rinpoche's teachings have much to offer.... His down-to-earth tone, peppered with songs and poetry from Buddhist sages, takes away much of the intense fear of death and makes it seem like an old friend."--"Los Angeles Times"A magnificent achievement. In its power to touch the heart, to awaken consciousness, it is an inestimable gift."--"San Francisco Chronicle Book Review

Book Description Paperback. Condition: New. Excellent condition. Interior is tight, bright and clean; no underlining, notes or highlighting. Binding is smooth and solid. Paperback cover is clean and sticker free. Minor scuffing and/or corner bumps on the paperback covers due to shelf wear. 100% Satisfaction Guaranteed. All items are carefully enclosed with bubble wrap. We ship promptly and worldwide via US Post and will email you a tracking number. Seller Inventory # SKU0063781

The Tibetan Book of Living and Dying (Revised and Updated Edition)