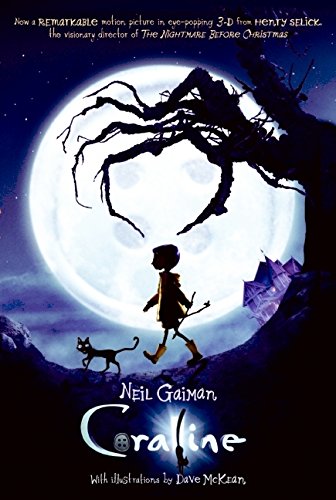 When Coraline explores her new home, she steps through a door and into another house just like her own . . . except that it's different. It's a marvelous adventure until Coraline discovers that there's also another mother and another father in the house. They want Coraline to stay with them and be their little girl. They want to keep her forever!

Coraline must use all of her wits and every ounce of courage in order to save herself and return home.

"A magnificently creepy story.for stouthearted kids who love a brush with the sinister, Coraline is spot on." -- Kirkus Reviews, Starred Review

By turns creepy and funny, bittersweet and playful can be read quickly and enjoyed deeply. --San Francisco Chronicle Book Review

A magnificently creepy story for stouthearted kids who love a brush with the sinister, Coraline is spot on. --Kirkus Reviews, Starred Review

"Gaiman's pacing is superb, and he steers the tension of the tale with a deft and practiced narrative touch."--Bulletin of the Center for Children's Books

"Chilly, finely-wrought prose, a truly weird setting and a fable that taps into our most uncomfortable fears."--Times Educational Supplement

"So wonderfully whimsical that readers of all ages will hungrily devour itCoraline is destined to become a classic.--Globe and Mail (Toronto)

"The most splendidly original, weird, and frightening book I have read, and yet full of things children will love."--Diana Wynne Jones