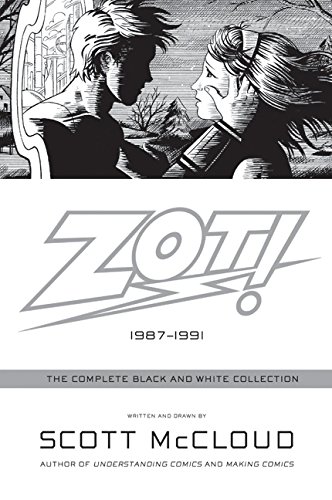 From comics pioneer Scott McCloud, the complete black and white collection of Zot!, featuring never-before-seen artwork and extensive commentary by the author

Zachary T. Paleozogt lives in "the far-flung future of 1965," a utopian Earth of world peace, robot butlers, and flying cars. Jenny Weaver lives in an imperfect world of disappointment and broken promises—the Earth we live in. Stepping across the portals to each other's worlds, Zot and Jenny's lives will never be the same again.

Now, for the first time since its original publication more than twenty years ago, every one of McCloud's pages from the black and white series has been collected in this must-have commemorative edition for aficionados to treasure and new fans to discover.

“McCloud is one of the major talents in the comics world.” (Sacramento Book Review)

“Essential...a stunning revelation...the packaging alone is fantastic...It’s long past time for a critical re-appraisal of these tender, delicate, overwhelmingly ambitious early stories, and what they tried to accomplish as well as what they actually did accomplish.” (The Onion A.V. Club)

“A brilliant superhero series that still holds up to the test of time 20 years later.” (Daily News)

“[S]ure to be a treasure trove for McCloud fans or lovers of intelligent retro comics action.” (Publishers Weekly)

“[D]elightful...Zot! has aged surprisingly well, and now it seems prescient in being strongly influenced by Japanese comics well before manga was common in America.” (Booklist)

“Shows that [McCloud] is not only an avid student and chronicler of comics, but an incredibly talented cartoonist...illuminates McCloud’s genius as he blends Eastern and Western comics influences into a mesmerizing superhero tale.” (David Gutowski for Largehearted Boy)

“Honestly, comics just don’t get any better than this.” (Gary Tyrrell for Fleen.com)

“One of comics’ best written, and most overlooked, titles...a stylish, often light-hearted, and yet dramatically compelling comic.” (Edge Boston)

Greatly influenced by the work of Astro Boy creator and "God of Manga" Osamu Tezuka, McLoud created "Zot!" more than two decades ago at the tender age of 23, making it the first manga-inspired American comics ever. Zachary T. Paleozogt, popularly known as Zot is a blond haired, blue eyed teenage hero from an alternate Earth - this alternate reality is a retro-futuristic technological utopia where flying cars, robots and interplanetary travel are common and nearly all of its inhabitants benefit from peace, prosperity and a marked lack of conventional social ills.Jaunting back and forth between the two worlds seems exciting for Zot at first, but there are subtle differences in the essential nature of the two planets that take some getting used to. On Zot's world, events naturally favor the "good guys" in any conflict, while on Earth, Zot is a less successful hero, reflecting the fact that our world clearly does not conform to the same rules as his. Nevertheless, Zot eagerly takes on Earth's challenges with the most amusing outcomes.

The series is particularly notable for its imagery which is reminiscent of the Golden Age of Science Fiction, its energetic visual design and its meta-fictional underpinning. This newly revised cult classic is not to be missed!