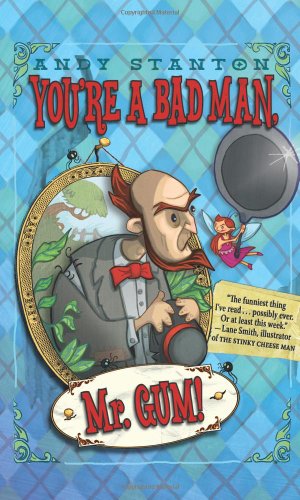 When he sees that his perfect garden has been destroyed by an overly excited and playful dog, mean Mr. Gum puts a plan in motion to seek his revenge until a young local girl steps in and gives her evil neighbor a much-needed lesson in kindness and understanding. 50,000 first printing.

"'Smooky palooki! This book is well brilliant! Andy Stanton is far too clever and funny and should be locked away in a very dark place that nobody can find.' (Jeremy Strong) 'Worryingly splendid' (Guardian)"

Andy Stanton studied English at Oxford but they kicked him out. Before becoming a children’s writer he was a film script reader, a market researcher, an NHS lackey, a part-time sparrow and a grape. Today he is best-known for the hilarious and much-loved Mr Gum books, which are published in 34 countries worldwide in over 30 languages. The series has won numerous awards, including the inaugural Roald Dahl Funny Prize, the Red House Children’s Book Award and two Blue Peter Book Awards.

Featuring a cast of weird and wonderful characters, the brilliantly anarchic Mr Gum adventures have become must-reads for children everywhere. Well, probably not in space - but everywhere else. In 2016, You’re A Bad Man, Mr Gum! celebrates its 10th anniversary and will be published as an Egmont Modern Classic.

Andy Stanton lives in North London. He has many interests, but best of all he likes books, comedy and music (even jazz). His favourite expression is ‘good evening’ and his favourite word is ‘captain’. So now you know!