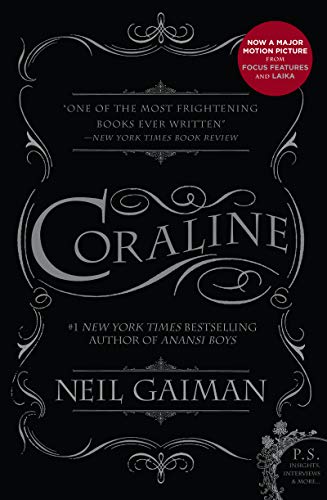 Now available in a rack-sized edition for older readers--Gaiman's "New York Times" bestselling novel takes readers over the threshold of imagination. A "Publishers Weekly" Best Book and winner of the Hugo Award for Best Novella.

"You don't have to be a kid to appreciate the spell Gaiman casts in the suspenseful Coraline. Walk through the door and you'll believe in love, magic and the power of good over evil."--USA Today

"This book tells a fascinating and disturbing story that frightened me nearly to death."--Lemony Snicket

"This book will send a shiver down your spine, out through your shoes, and into a taxi to the airport. It has the delicate horror of the finest fairy tales, and it is a masterpiece."--Terry Pratchett

"I think this book will nudge Alice in Wonderland out of its niche at last. It is the most splendidly original, weird, and frightening book I have read, and yet full of things children will love."--Diana Wynne Jones

"A deliciously scary book. The magical elements are surprising and new, and the evil that she has to fight is disturbing in ways that matter."--Orson Scott Card

"CORALINE may be Gaiman's most disciplined and fully controlled novel to date, and it may even end up as something of a classic."--Locus

"Chilly, finely wrought prose, a truly weird setting, a nd a fable that taps into our most uncomfortable fears."--Times Educational Supplement

"Rise to your feet and applaud: Coraline is the real thing."--Philip Pullman, author of His Dark Materials

Book Description Paperback. Condition: New. Dave Mckean (illustrator). Language: English. Brand new Book. In Coraline's family's new flat there's a locked door. On the other side is a brick wall-until Coraline unlocks the door . . . and finds a passage to another flat in another house just like her own.Only different.The food is better there. Books have pictures that writhe and crawl and shimmer. And there's another mother and father there who want Coraline to be their little girl. They want to change her and keep her with them. . . . Forever.Coraline is an extraordinary fairy tale/nightmare from the uniquely skewed imagination of #1 New York Times bestselling author Neil Gaiman. Seller Inventory # ABZ9780061139376

Book Description Paperback. Condition: new. Paperback. In Coraline&#039;s family&#039;s new flat there&#039;s a locked door. On the other side is a brick wall until Coraline unlocks the door . . . and finds a passage to another flat in another house just like her own. Only different. The food is better there. Books have pictures that writhe and crawl and shimmer. And there&#039;s another mother and father there who want Coraline to be their little girl. They want to &quot;change&quot; her and keep her with them. . . . &quot;Forever.&quot; &quot;Coraline&quot; is an extraordinary fairy tale/nightmare from the uniquely skewed imagination of #1&quot; New York Times&quot; bestselling author Neil Gaiman. Now available in a rack-sized edition for older readers&mdash;Gaiman&#039;s &quot;New York Times&quot; bestselling novel takes readers over the threshold of imagination. A &quot;Publishers Weekly&quot; Best Book and winner of the Hugo Award for Best Novella. Shipping may be from multiple locations in the US or from the UK, depending on stock availability. Seller Inventory # 9780061139376