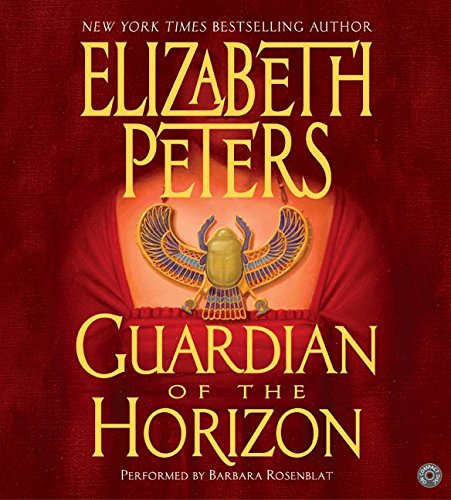 Recounts the adventures of the Emerson family in 1907 and 1908, a period following their banishment from the Valley of the Kings, during which Ramses, hopelessly in love with Nefret, finds his plans interrupted by a plea for help from Prince Tarek from the Lost Oasis. By the author of Children of the Storm. Simultaneous.

In Guardian of the Horizon Amelia Peabody and her husband Emerson, along with their son Ramses and foster daughter Nefret, are summoned back to the Lost Oasis, a hidden stronghold in the western desert whose existence they discovered many years ago (in The Last Camel Died at Noon) and have kept secret from the entire world, including their fellow Egyptologists. According to Merasen, the brother of the ruling monarch, their old friend Prince Tarek is in grave danger and needs their help. However, it's not until they retrace their steps to the Oasis, with its strange mixture of Meroitic and Egyptian cultures, that they learn the real reason for their journey. There's no better company on an archaeological expedition than the Father of Curses and the Lady Doctor, their beautiful Anglo-Egyptian ward and Ramses, the Demon Brother who loves her. If you haven't met the indomitable Amelia yet, this intriguing tale is a great place to start. --Jane Adams, Amazon.com

'Peters has a gift for keeping the action revving while comedy steals the show.' -- Good Book Guide, May 1, 2004

1. Guardian of the Horizon