Items related to Obedience to Authority: An Experimental View 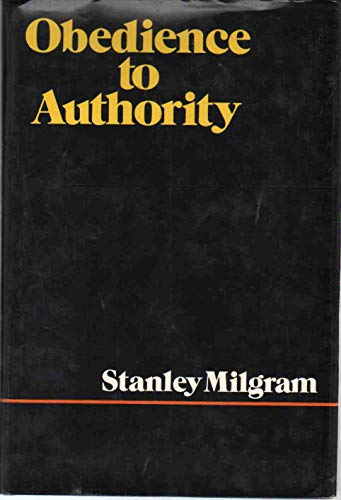 "Stanley Milgram's experiments on obedience to malevolent authority seemed to me to be the most important social psychological research done in this generation.... The quality of exposition in the book is so high that it qualifies as literature as well as science" -- Roger Brown, Harvard University"This well-designed and brilliantly executed research study, reported in an unusually fascinating and very readable style, reveals the elusive and sometimes shocking conditions under which men obey authority regardless of the morality involved">

Volunteers are invited to a scientific laboratory under the pretence of participating in a study about the effects of punishment on learning. They are instructed by an experimenter to administer an electric shock of increasing intensity every time a 'learner', strapped into an electric chair, makes a mistake. How many, if any, would go right up the scale to 450 Volts?

The implications of Stanley Milgram's extraordinary findings (up to 65% of subjects administered the full shock) are devastating. From the Holocaust to Vietnam, Obedience to Authority goes some way towards explaining how ordinary people can commit the most horrific of crimes if placed under the influence of a malevolent authority.

Stanley Milgram's classic and controversial social psychology title has been unavailable in the UK for many years.

Book Description Condition: Good. A+ Customer service! Satisfaction Guaranteed! Book is in Used-Good condition. Pages and cover are clean and intact. Used items may not include supplementary materials such as CDs or access codes. May show signs of minor shelf wear and contain limited notes and highlighting. Seller Inventory # 0060129387-2-4

Book Description Hardcover. Condition: Fine. Dust Jacket Condition: Fine. 1st Edition. 8vo, star mark on bottom edge else about Fine in About Fine price-clipt D.J., stated FIRST EDITION, one of the most notorious of psych experiements, and a kind of coda to the 60's.(H3/6). Seller Inventory # ABE-1095535312