Items related to The boys of summer

Kahn, Roger The boys of summer

The boys of summer 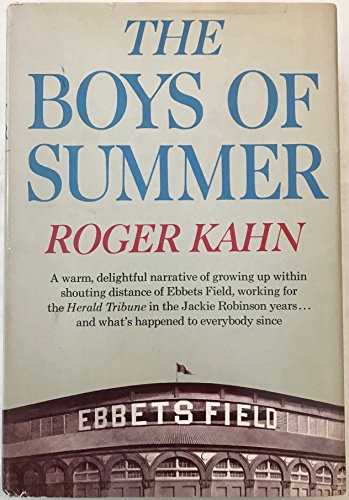 This is a book about young men who learned to play baseball during the 1930s and 1940s, and then went on to play for one of the most exciting major-league ball clubs ever fielded, the team that broke the color barrier with Jackie Robinson. It is a book by and about a sportswriter who grew up near Ebbets Field, and who had the good fortune in the 1950s to cover the Dodgers for the Herald Tribune. This is a book about what happened to Jackie, Carl Erskine, Pee Wee Reese, and the others when their glory days were behind them. In short, it is a book about America, about fathers and sons, prejudice and courage, triumph and disaster, and told with warmth, humor, wit, candor, and love.

"Roger Kahn has achieved the near impossible in his "The Boys of Summer" by writing two splendid books in one, neither of which, strangely enough, is a sports book although baseball is the central theme of both. To Mr. Kahn, 'people' is the name of the game, and it's a game he plays with brilliance, insight and thoughtfulness. To say that I 'enjoyed' the book is to say that winning a World Championship is 'interesting', owing a derby winner 'nice', and starring in the Super Bowl 'fun'."-- Bill Veeck"Kahn's book is marvelous...a splendid historical work. It is about youthful dreams in small American towns and big cities decades ago, and how some of these dreams where fulfilled, and about what happened to those dreamers after reality and old age arrived. It is also a book about ourselves, those of us who shared and identified with the dreams and glories of our heroes."-- Gay Talese"What most people look for in a book is a good story. Roger Kahn gives us about fifteen of them woven into one coherent narrative that is moving and funny and sentimental (about people and things that merit sentiment) and cynical (about those that don't)."-- Ring Lardner, Jr. "To writer Roger Kahn, the old Brooklyn Dodgers National League baseball team is a forever a priceless violin and he is the bow which must play upon it. This isn't a book; it's a love affair between a man, his team, and an era."-- "Christian Science Monitor""A work of high purpose and poetic accomplishment. The finest American book on sports. I commend it without qualification."-- James Michener"The "Boys of Summer" is a book of life . . . beautifully and above all . . . respectfully observed."-- Paul Hogan"A work of high purpose and poeticaccomplishment. The finest American book on sports. I commend it without qualification."--James Michener"The best team the majors ever saw, a team so extraordinary that Marianne Moore wrote poems to it--the Brooklyn Dodgers of the 1950s...A moving elegy!"--"New York Times"Not just another book about baseball or a boy growing up to like baseball, but a book about pain and defeat and endurance, about how men anywhere must live."--Peter Prescott, "Newsweek

Roger Kahn, a prize-winning author, grew up in Brooklyn, where he says everybody on the boys' varsity baseball team at his prep school wanted to play for the Dodgers. None did. He has written nineteen books. Like most natives of Brooklyn, he is distressed that the Dodgers left. -In a perfect world,- he says, -the Dodgers would have stayed in Brooklyn and Los Angeles would have gotten the Mets.-

The Boys of Summer Roger Kahn