Items related to Letters and Papers from Prison

Letters and Papers from Prison 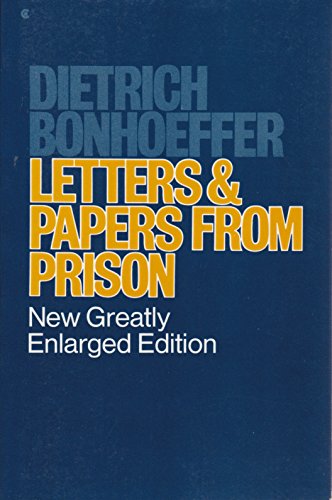 "Bonhoeffer is teaching a few Protestants what it means to say 'yes' to the 20th century and still somehow stay recognizablly Protestant. A look at a few of his seminal ideas will make this clear.

'With regard to composition there is hardly blemish of any kind: the grammar, the rhymes, the lucidity of expression, the consistency of style, the adaptation to various metres, the use of repition are all well-nigh prefectly formed...Very good valuer indeed!' Methodist Recorder, February 2007

Dietrich Bonhoeffer was born in Breslau in 1906. The son of a famous German psychiatrist, he studied in Berlin and New York City. He left the safety of America to return to Germany and continue his public repudiation of the Nazis, which led to his arrest in 1943. Linked to the group of conspirators whose attempted assassination of Hitler failed, he was hanged in April 1945.

1. Letters And Papers From Prison

2. LETTERS AND PAPERS FROM PRISON Dietrich. Bonhoeffer and Eberhard Bethge

3. LETTERS AND PAPERS FROM PRISON