Items related to Half of a Yellow Sun: The Women’s Prize for...

Ngozi Adichie, Chimamanda Half of a Yellow Sun: The Women’s Prize for Fiction’s ‘Winner of Winners’

Half of a Yellow Sun: The Women’s Prize for Fiction’s ‘Winner of Winners’ 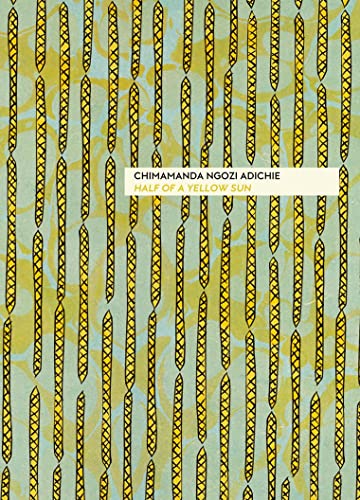 WINNER OF THE BAILEYS PRIZE BEST OF THE BEST

Winner of the Orange Broadband Prize for Fiction 2007, this is a heartbreaking, exquisitely written literary masterpiece

Ugwu, a boy from a poor village, works as a houseboy for a university professor. Olanna, a young woman, has abandoned her life of privilege in Lagos to live with her charismatic new lover, the professor. And Richard, a shy English writer, is in thrall to Olanna’s enigmatic twin sister. As the horrific Biafran War engulfs them, they are thrown together and pulled apart in ways they had never imagined.

Chimamanda Ngozi Adichie’s masterpiece, winner of the Orange Prize for Fiction, is a novel about Africa in a wider sense: about the end of colonialism, ethnic allegiances, class and race – and about the ways in which love can complicate all of these things.

'Vividly written, thrumming with life...a remarkable novel. In its compassionate intelligence as in its capacity for intimate portraiture, this novel is a worthy successor to such twentieth-century classics as Chinua Achebe's “Things Fall Apart” and V. S. Naipaul's “A Bend in the River”.' Joyce Carol Oates

'I look with awe and envy at this young woman from Africa who is recording the history of her country. She is fortunate – and we, her readers, are even luckier.' Edmund White

'Absolutely awesome. One of the best books I've ever read.' Judy Finnigan

'[Deserves] a place alongside such works as Pat Barker's “Regeneration” trilogy and Helen Dunmore's depiction of the Leningrad blockade, “The Siege”.' Guardian

‘Heartbreaking, funny, exquisitely written and, without doubt, a literary masterpiece and a classic’
Daily Mail

‘Stunning. This novel is an immense achievement’ Observer

‘A landmark novel. Adichie brings to history a lucid intelligence and compassion, and a heartfelt plea for memory’ Guardian

‘I wasted the last fifty pages, reading them far too greedily and fast, because I couldn’t bear to let go ... magnificent’ Margaret Forster

Chimamanda Ngozi Adichie was born in Nigeria in 1977. Her first novel ‘Purple Hibiscus’ was published in 2003 and was longlisted for the Booker Prize. Her second novel ‘Half of a Yellow Sun’ won the 2007 Orange Prize for Fiction. Her short story collection, ‘The Thing Around Your Neck’, was published to critical acclaim in 2009. Her work has been selected by the Commonwealth Broadcasting Association and the BBC Short Story Awards, has appeared in various literary publications, including Zoetrope and The Iowa Review. She won a MacArthur ‘genius’ grant in 2009, and in 2010 appeared on the New Yorker’s list of the best 20 writers under 40. Her third novel, ‘Americanah’, was published to widespread critical acclaim in 2013. ‘Half of a Yellow Sun’ is now a major feature film, ‘Americanah’ is in production. She lives in Nigeria.

Book Description Condition: Good. Ships from the UK. Former library book; may include library markings. Used book that is in clean, average condition without any missing pages. Seller Inventory # 18136925-20

Book Description Paperback. Condition: Good. Ex Library Book with usual stamps and stickers. Good condition is defined as: a copy that has been read but remains in clean condition. All of the pages are intact and the cover is intact and the spine may show signs of wear. The book may have minor markings which are not specifically mentioned. Most items will be dispatched the same or the next working day. Seller Inventory # mon0017091442

half a yellow sun