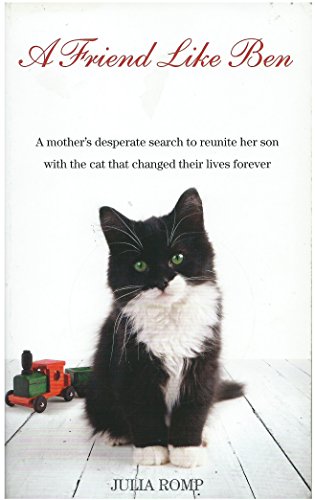 The heart-warming true story of a little boy and the cat that changed his life. Nine year old George was severely autistic; quiet and withdrawn, he appeared lost in his own world most of the time. His mother Julia despaired, but try as she might she couldn't bring him out of his shell. Then one day a small, black-and-white stray cat appeared at the bottom of her garden and George's face lit up at the sight of him. Despite herself Julia agreed to adopt him as a pet. George named his new friend Ben, and the four-legged addition to the household had a wonderful and unexpected side-affect. George and Ben bonded, and George began to open up; to play with Ben, to converse with him and make up stories about their adventures together to excitedly recount to Julia. For Julia this was a magical way to communicate with her son - and Ben had made it possible. For three happy years, the trio were inseparable and George made remarkable progress. But then disaster struck - Ben went missing. The small cat who had coaxed George out of a world of silence had disappeared, and nobody could find him. George was utterly devastated and, pining for his lost friend, he began to retreat into himself. Sensing her son was slipping through her fingers once more, Julia embarked on a desperate search; a search that would see her travelling across numerous counties, risking injury and enlisting help from all different places, and all different people. The weeks turned into months, and Christmas was fast approaching but George did not want to celebrate without Ben by his side. Julia privately despaired of ever finding her son's best friend but four days before Christmas Day, during the worst snowfall ever, Julia got a call from a family living in Brighton, over 50 miles from their home in London, which finally offered a ray of hope ...

‘Julia paints a vivid picture of the symptoms and effects of autism... A truly inspirational biography.’ Hull Daily Mail

‘A very interesting read which is both uplifting and informative.’ South Wales Argus

‘A satisfying true story... the perfect Christmas gift for a cat lover.’ The Weekend Examiner

Julia Romp lives in Isleworth with her son George and their cat Ben. When she is not looking after her family and the stray cats in the area, Julia works for the charity Lost and Found helping to re-home cats. After her success of her campaign to find Ben, Julia has become known as the local pet detective.

Book Description HarperCollins Publishers. Paperback. Condition: Good. A copy that has been read, but remains in clean condition. All pages are intact, and the cover is intact. The spine may show signs of wear. Pages can include limited notes and highlighting, and the copy can include previous owner inscriptions. At ThriftBooks, our motto is: Read More, Spend Less. Seller Inventory # G0007930658I3N00

Book Description Paperback. Condition: Very Good. The book has been read, but is in excellent condition. Pages are intact and not marred by notes or highlighting. The spine remains undamaged. Seller Inventory # GOR004499610

Book Description HarperTrue 20/12/2012, 2012. Condition: Very Good. This book is in very good condition and will be shipped within 24 hours of ordering. The cover may have some limited signs of wear but the pages are clean, intact and the spine remains undamaged. This book has clearly been well maintained and looked after thus far. Money back guarantee if you are not satisfied. See all our books here, order more than 1 book and get discounted shipping. . Seller Inventory # 7719-9780007930654

Book Description HarperTrue 20/12/2012, 2012. Condition: Very Good. Shipped within 24 hours from our UK warehouse. Clean, undamaged book with no damage to pages and minimal wear to the cover. Spine still tight, in very good condition. Remember if you are not happy, you are covered by our 100% money back guarantee. Seller Inventory # 6545-9780007930654

Book Description HarperTrue 20/12/2012, 2012. Condition: Good. Will be shipped promptly from UK warehouse. Book is in good condition with no missing pages, no damage or soiling and tight spine. There may be some dog-eared pages showing previous use but overall a great book. Seller Inventory # 9053-9780007930654

Book Description HarperTrue, 2012. Paperback. Condition: Used; Good. **Simply Brit** Shipped with Premium postal service within 24 hours from the UK with impressive delivery time. We have dispatched from our book depository; items of good condition to over ten million satisfied customers worldwide. We are committed to providing you with reliable and efficient service at all times. Seller Inventory # 2068168