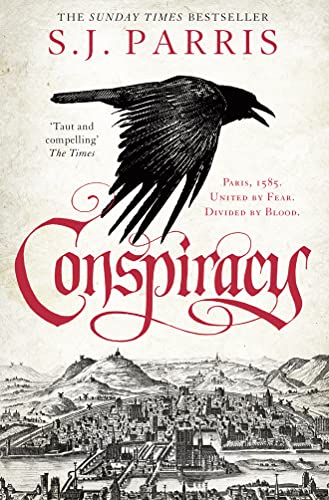 The No. 1 Sunday Times bestselling series

A KING WITHOUT AN HEIR

Heretic-turned-spy Giordano Bruno arrives in Paris to find a city on the edge of catastrophe. King Henri III lives in fear of a coup by the Duke of Guise and his fanatical Catholic League, and another massacre on the streets.

A COURT AT WAR WITH GOD

When Bruno’s old rival, Father Paul Lefèvre is found murdered, Bruno is drawn into a dangerous web of religious politics and court intrigue. And watching over his shoulder is the King’s mother, Catherine de Medici, with her harem of beautiful spies.

A DEADLY CONSPIRACY IN PLAY

When murder strikes at the heart of the Palace, Bruno finds himself on the trail of a killer who is protecting a terrible secret. With the royal houses of France and England under threat, Bruno must expose the truth – or be silenced for good...

Perfect for fans of C. J. Sansom and Hilary Mantel

‘Colourful characters, fast-moving plots and a world where one false step in religion or politics can mean a grisly death’ Sunday Times

‘Twists and turns like a corkscrew of venomous snakes’ Stuart MacBride

‘A tight plot combines with subtly-realised characters and an omnipresent sense of danger ... My pleasure in the vividly textured backdrop and a cracking story was accompanied by an uneasy shudder’ Daily Mail

‘Colourful characters, fast-moving plots and a world where one false step in religion or politics can mean a grisly death.’ Sunday Times

‘Successful historical thrillers need three elements: a killer plot that weaves seamlessly into the history; an engaging protagonist; and an atmospheric sense of place. Parris nails all three – Conspiracy is a gem. The Times

‘This latest addition to the series will no doubt repeat its predecessors’ success... The authentically febrile air of suspense that Parris generates, as well as a shoal of red herrings and some impish, what-if plotting. The drawing-room style denouement, conducted as it is in a salon at the Tuileries Palace, is also executed with knowing relish.’ Observer

‘I can thoroughly recommend Conspiracy, which twists and turns like a corkscrew of venomous snakes’ Stuart MacBride

‘Impossible to resist ... Parris creates a convincing sense of the past, woven with so much intrigue that the head fairly spins’ Daily Telegraph

‘Parris writes with confident ease of Tudor London ... The dialogue balances nicely on a tightrope of period phrases and cut-to-the-chase colloquialisms. More, please’ The Times

‘Full of surprises ... an imaginatively satisfying addition to the many real intrigues surrounding the imprisoned Mary Stuart and the threats to Elizabeth’s security’ TLS

‘Fascinating ... The period is incredibly vivid and the story utterly gripping’ Conn Iggulden

A brilliantly unusual glimpse at the intrigues surrounding Queen Elizabeth I’ Andrew Taylor, bestselling author of The American Boy