Items related to "The Times" Mapping The Railways: The journey...

David Spaven; Julian Holland "The Times" Mapping The Railways: The journey of Britain's railways through maps

"The Times" Mapping The Railways: The journey of Britain's railways through maps 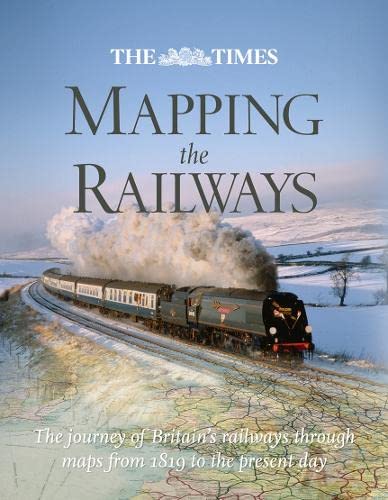 Follow the development, decline and revival of Britain’s railways through a unique collection of old and new maps, commentaries and photographs. The story is traced from early ‘waggonways’ through the steam era to today’s diesel and electric railways.

Railways appear in almost every type of topographical map available throughout the nineteenth and twentieth centuries.

Detailed parliamentary plans were drawn up for many hundreds of proposed railway schemes (plenty of which never got past the drawing board).

Once built, the Ordnance Survey then plotted the lines onto their map sheets and cartographers, such as John Barthomolew & Son, Cruchley and Bradshaw, were commissioned to draw vast numbers of railway maps during the boom years.

Maps were produced as an aid to the management of the railways, to promote the railway companies’ networks, and to enable passengers to plan their journeys and understand the passing scene as they gazed from the carriage window.

Twenty-four ‘mileposts’ describe the history of the railways. Alongside the maps are a series of ‘milepost’ features which give a detailed description of key events, eras and personalities in the history of Britain’s railways.

The nineteenth century saw the foundations laid for our modern railway network, with huge building projects constructing thousands of miles of track, bridges, and tunnels.

This expansion slowed in the early twentieth century as competition from the car and the lorry began to bite.

The railways made an enormous contribution to the World Wars, then underwent massive re-equipment after nationalization, before changing drastically following the infamous ‘Beeching Report’ of 1963.

The modern era has seen an expansion of the network again, with the building of the Channel Tunnel and the re-opening of a significant number of lines closed under the 'Beeching axe', many as heritage railways.

‘Will appeal not only to geographers and cartographers but to general rail enthusiasts too.’ The Railway Magazine

‘Sumptuous production that one could pore over for hours and still find much of interest.’ Today’s Railway

“This is one of the books of the year and is riveting reading.” Rail Express

Julian Holland
Specialist railway author, photographer and enthusiast, whose recent titles include The Lost Joy of Railways, The Lost Lines of Britain, Steaming Across Britain and three volumes of Amazing & Extraordinary Railway Facts.

David Spaven
Rail consultant by profession, a geographer by background, and a railway enthusiast since childhood. Currently writing Waverley Route: The Life, Death & Re-Birth of the Borders Railway.

1. The Times Mapping the Railways: The Journey of Britain's Railways Through Maps from 1819 to the Pres

2. The Times Mapping the Railways: The Journey of Britain&#39;s Railways Through Maps from 1819 to the Pres

3. The Times Mapping the Railways: The Journey of Britain's Railways Through Maps from 1819 to the Present Day

4. The Times Mapping the Railways: The Journey of Britain's Railways Through Maps from 1819 to the Present Day