Items related to A Handful of Summers

Forbes, Gordon A Handful of Summers

A Handful of Summers 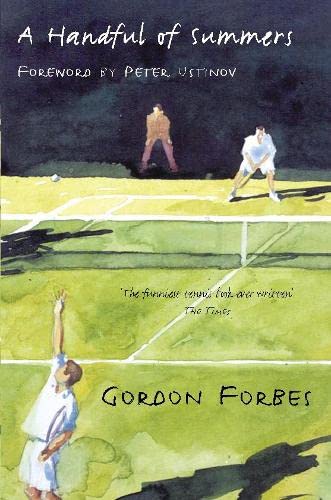 A classic memoir, A Handful of Summer is the hilarious account of the tennis travels of South African doubles partnership George Forbes and Abe Segal, and of the riotous characters who populated the amateur tennis world in the 50s and 60s as it stumbled towards professionalism.

Full of superb anecdotes, bursting with vitality and humour, and written with unflagging zest and panache, it is a unique dressing-room view of the tennis world.

'A riotously extroverted memoir. I can't get out of my mind some of the funny series that Mr Forbes paints'
CHRISTOPHER LEHMANN-HAUPT, New York Times

'Mesmerising, the most jingly-jangly hilarious sporting memoir that can ever have been written'
GUARDIAN

'If you want to know what it is like to play on the tour, read 'A Handful of Summers'‘
ROD LAVER

'Forbes spares few, least of all himself, in this honest, at times hilarious, at times almost whimsical, account of the weird and wonderful world of the tennis star'
SUNDAY TIMES

'Rollicking, outrageous, raucous and riveting – I laughed my head off'
SUNDAY EXPRESS

A Handful of Summers is a cult classic. It's a delightfully uninhibited insider's account of tennis on the international circuit - both on and off the court - in the fifties and sixties, the glory days of Fred Perry, Roy Emerson, and Virginia Wade. Forbes begins with his childhood on a farm in South Africa, where he learned to play tennis on a gravel court. His game takes him to Europe, as a South Africa Davis Cup player, and finally to Wimbledon. Along the way he cavorts with extraordinary characters among the world-class players, and their tales, and his, shine throughout this memoir of irresistible wit and humility. (5 X 7 3/4, 352 pages)

1. A Handful of Summers

3. A Handful of Summers

4. A Handful of Summers