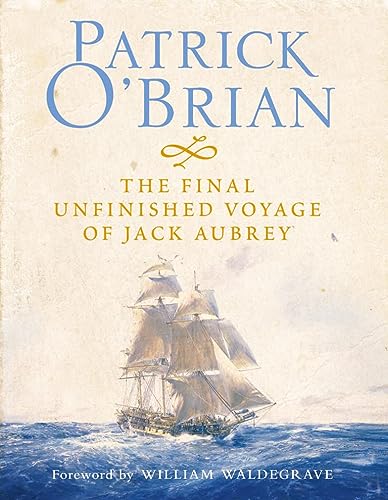 At the time of his death, Patrick O'Brian had begun to write a novel to follow on from Blue at the Mizzen. These are the chapters he had completed of the final voyage of Jack Aubrey and Stephen Maturin – the greatest friendship of modern literature

The story picks up from the end of Blue at the Mizzen when Jack Aubrey receives the news, in Chile, of his elevation to flag rank: Rear Admiral of the Blue Squadron, with orders to sail to the South Africa station. This new novel, unfinished and untitled at the time of O’Brian’s death, would have been a chronicle of that mission, and much else besides.

As the novel opens, we are able to visit these friends we have followed so very far in a rare state of almost perfect felicity. Jack has seen his illegitimate son ably discharging important duties. Sophie and his daughters are with him; Brigid is with her father, she's thriving, and Stephen is with a woman who is very dear to him. Jack, at last, is flying a rear-admiral's flag aboard a ship of the line.

The chapters left on O’Brian’s death are presented here both in printed version – including his corrections to the typescript – and a facsimilie of his manuscript, which goes several pages beyond the end of the typescript and includes marginal notes by O’Brian.

And so this great ‘roman fleuve’ comes to an end with Jack, with his ‘sacred blue flag’, sailing through fair, sweet days – Stephen with his dissections and new love, Killick muttering darkly over the toasted cheese... Of course, we would rather have had the whole story; instead we have this proof that O’Brian’s powers of observation, his humour and his understanding of his characters were undiminished to the end.

‘There is nothing in this century that rivals Patrick O’Brian’s achievement in his chosen genre. His novels embrace with loving clarity the full richness of the 18th-century world. They embody the cruelty of battle, the comedy of men’s lives, the uncertain fears that plague their hearts; and yet, not far away, is the vision of an ideal existence.’ Amanda Foreman, New York Times

‘Patrick O'Brian has given a farewell to his followers that is as gracious as it is gallant. And we, in turn, may find some solace in the thought that of all people, this man would not have hated to be taken out of action much as Nelson was: deep in triumph, shedding glory on the service he loved, and still at the peak of his powers.’ Richard Snow

'One of the most compelling and brilliant novelists of his time...Beyond his superbly elegant writing, wit and originality, Patrick O'Brian showed an understanding of the nature of a floating world at the mercy of the wind and the sea which has never been surpassed.' MAX HASTINGS, Evening Standard