Items related to Mayflower: A Voyage to War

Mayflower: A Voyage to War 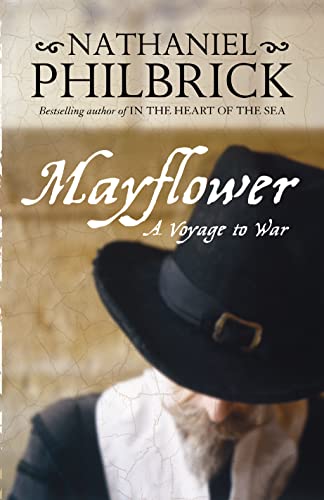 Bestselling author Nathaniel Philbrick’s new book tells the story of the Pilgrim fathers who set sail on the Mayflower and the bloody battle they ultimately waged against the Native Americans.

Behind the quaint and pious version of the Mayflower story usually taught in American primary schools is a tumultuous and largely untold tale of violence, subterfuge and epic drama.

Following the Pilgrims from their perilous journey from England on a battered, leaky ship, through their first bitter North American winter (during which half of them died), to their equally bitter battle against the native Wampanoag tribe fifty years later, Philbrick paints a vivid and compelling picture of conflict, colonialism and a grim determination to survive in an unforgiving and, to the Europeans, dangerously alien environment.

Among the litany of hardships, however, are stories of friendship and co-operation among the settlers and indigenous peoples, whose timely assistance on more than one occasion rescued the Pilgrims from otherwise certain death. This delicate and unstable relationship continued until King Philip's war, a terribly bloody conflict which decimated the English population and all but obliterated the Wampanoag. Central to the story of this decisive American battle are a host of marvellous characters, including Benjamin Church, the Plymouth-born frontiersman who used his knowledge of 'Indian ways' to help the British defeat Philip.

In capturing the drama and uncertainty of the first fifty years of settlement at Plymouth, Philbrick's fascinating history sets the stage for the later developments that would define the American nation and its inexorable push west.

‘Philbrick's account brings the Plymouth Colony and its leaders, including William Bradford, Benjamin Church and the bellicose, dwarfish Miles Standish, vividly to life. More importantly, he brings into focus a gruesome period in early American history. For Philbrick, this is yet another award-worthy story of survival.’ Publishers Weekly

‘Nathaniel Philbrick breathes fresh life into this familiar tale...as a lively account of the Pilgrims' flight from England to Holland and then to New England, “Mayflower” could hardly be bettered.’ Times Literary Supplement

Nathaniel Philbrick is a historian and broadcaster who has written extensively about sailing. He is director of the Egan Institute of Maritime Studies on Nantucket Island, and a research fellow at the Nantucket Historical Association. He has lived in Nantucket with his wife and two children since 1986.

1. Mayflower. A story of Community, Courage and War