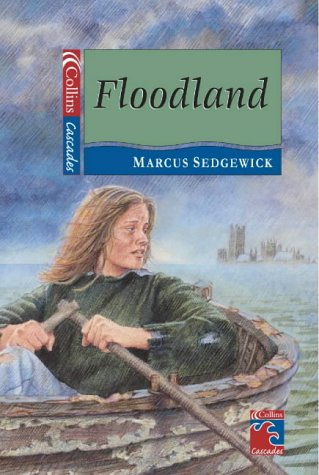 Set in a future where most of Britain is covered by water, and left behind when her family escape the floods, Zoe is alone in the ruins of Norwich. She escapes to Eels Island but there encounters a sinister society run by a strange boy. Who can she trust? Will she ever see her parents again?

Zoe ran. Harder than she had ever run in her life. Her feet pounded through the deserted streets of derelict buildings. Somewhere, not far behind, she could hear the gang coming after her. It felt as if her heart would burst but she didn't slow down. She'd been planning to leave the island for a long time but had been putting it off. It was a big decision to set out to sea in a tiny rowing boat. Now she had no choice.

Floodland is an extraordinary novel, set some time in the not too distant future in a land that has been reclaimed by the sea. Zoe last saw her father and her sick mother as they sailed away on the last boat from Norwich, leaving her to face the future alone. She finds her way to Eel Island, a place where mobs rule in a bid for survival in a dark, dank graveyard of a world.

This is stunning debut novel from Marcus Sedgwick and one in which the reader is instantly transported to the watery wastelands of the Fens via strong characterisation and an atmospheric tension that envelops the reader in a sea mist that chills to the bone. The odds are against survival but as reluctant relationships develop, built on the shaky foundations of need rather than any form of trust, Sedgwick captures the essence of human nature by never passing judgement on even the bad guys, preferring instead to make them, quite simply, human beings who have been forced to recognise the survival of the fittest.

Floodland is a challenging novel for older readers who will be captivated by a vision of the future that is not so unbelievable. Age 11 and over. --Susan Harrison

'a dazzling debut from a writer of exceptional talent.' (Publishing News) 'Floodland is a gripping thrillera visionary and moral fable' (Kevin Crossley-Holland)

Book Description Collins Educational, 2002. Hardback. Condition: Fair. New Ed. A readable copy of the book which may include some defects such as highlighting and notes. Cover and pages may be creased and show discolouration. Seller Inventory # GOR002937011