Items related to The Practice of History (Flamingo S.)

The Practice of History (Flamingo S.) 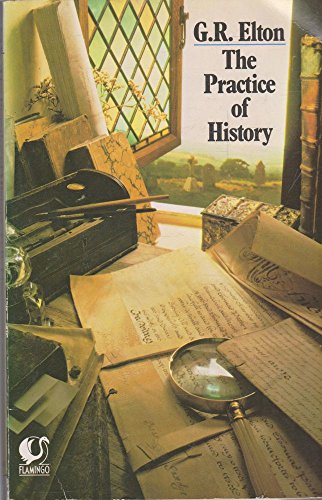 The new edition of G. R. Elton′s classic work is a wide–ranging, succinct and practical introduction for all students and general readers of history. It makes a major contribution to the question "what is history?".

G. R. Elton was Regius Professor of Modern History at Cambridge University from 1983 to 1988. Among his numerous works are The Tudor Revolution in Government (1953), England under the Tudors (1955), Reform and Renewal (1973), The Parliament of England 1559–1581 and The English (Blackwell, 1992), and he was founding editor of the Blackwell History of the Modern British Isles. Professor Elton was President of the Royal Historical Society from 1972 until 1976 and honorary Vice–President from 1976 until his death in 1994. Richard J. Evans is Professor of Modern History at the University of Cambridge. His many publications include Death in Hamburg (1987), Rituals of Retribution (1996), In Defence of History (1997, reissued with a new Afterword 2001), and Tales from the GermanUnderworld (1998).

This original and important book on the study of history is now available in a new edition. G. R. Elton′s classic work is a wide–ranging, succinct and practical introduction for all students and general readers, and it makes a major contribution to the question "What is history?" This book sets out Elton′s experience in the study, writing and teaching of history. The author perceived the work as a manifesto, an explanation of his faith and practice of the subject. The book has become a classic text for students and teachers since its first publication in 1969. This edition includes a new afterword by Richard Evans which assesses the book′s relationship to Elton′s work as a whole, its impact on the historical profession and its lessons for historians today.

2. The Practice of History (Flamingo S.)

Book Description Paperback. Condition: Very Good. The book has been read, but is in excellent condition. Pages are intact and not marred by notes or highlighting. The spine remains undamaged. Seller Inventory # GOR004663617

Book Description Condition: Good. A+ Customer service! Satisfaction Guaranteed! Book is in Used-Good condition. Pages and cover are clean and intact. Used items may not include supplementary materials such as CDs or access codes. May show signs of minor shelf wear and contain limited notes and highlighting. Seller Inventory # 0006540686-2-4

4. The Practice of History (Flamingo)

Book Description Paperback. Condition: Used; Good. **SHIPPED FROM UK** We believe you will be completely satisfied with our quick and reliable service. All orders are dispatched as swiftly as possible! Buy with confidence!. Seller Inventory # mon0001160579

5. The Practice of History (Flamingo)

Book Description Paperback. Condition: Used; Good. **Simply Brit** Shipped with Premium postal service within 24 hours from the UK with impressive delivery time. We have dispatched from our book depository; items of good condition to over ten million satisfied customers worldwide. We are committed to providing you with reliable and efficient service at all times. Seller Inventory # 2671456

6. Practice of History, The

Book Description Paperback. Condition: Very Good. Item is in very good condition. If supplemental codes/CDs for textbooks are required please contact us prior to purchasing as they may be missing. Photos are stock pictures and not of the actual item. Seller Inventory # DS-0006540686-2

8. The Practice of History (Flamingo S.)

Book Description Paperback. Condition: Very Good. Pages clean with text bright. No markings. WE ARE PROCESSING ORDERS AS NORMAL DURING THIS VIRUS EPIDEMIC, ALL ITEMS ARE SENT BY ROYAL MAIL. DISPATCHED FROM THE UK WITHIN 24 HOURS ( BOOKS ORDERED OVER THE WEEKEND DISPATCHED ON MONDAY) BY ROYAL MAIL. ALL OVERSEAS ORDERS SENT BY AIR MAIL. WE ALSO ACCEPT PAYMENT IN US DOLLARS OR EURO BY BANK TRANSFER. Seller Inventory # mon0000698028

9. The Practice of History