Items related to No Logo 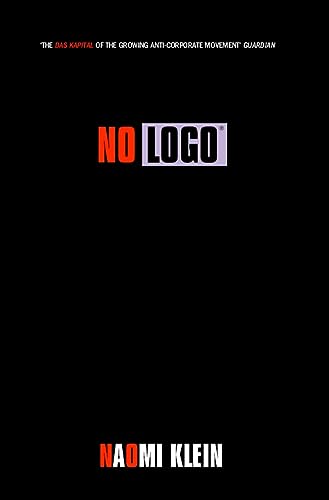 The book that offers a cure for affluenza, ‘No Logo’ is one of those rare books that defines a generation, the most significant one since Douglas Coupland’s ‘Generation X’.

By the time you’re twenty-one, you’ll have seen or heard a million advertisements. But you won’t be happier for it.

This is a book about that much-maligned, much-misunderstood generation coming up behind the slackers, who are being intelligent and active about the world in which they find themselves. It is a world in which all that is ‘alternative’ is sold, where any innovation or subversion is immediately adopted by un-radical, faceless corporations. But, gradually, tentatively, a new generation is beginning to fight consumerism with its own best weapons; and it is the first skirmishes in this war that this abrasively intelligent book documents brilliantly.

We live in an era where image is nearly everything, where the proliferation of brand-name culture has created, to take one hyperbolic example from Naomi Klein's No Logo, "walking, talking, life-sized Tommy [Hilfiger] dolls, mummified in fully branded Tommy worlds". Brand identities are even flourishing online, she notes--and for some retailers, perhaps best of all online: "Liberated from the real-world burdens of stores and product manufacturing, these brands are free to soar, less as the disseminators of goods or services than as collective hallucinations".

In No Logo, Klein patiently demonstrates, step by step, how brands have become ubiquitous, not just in media and on the street but increasingly in the schools as well. The global companies claim to support diversity but their version of "corporate multiculturalism" is merely intended to create more buying options for consumers. When Klein talks about how easy it is for retailers like Wal-Mart and Blockbuster to "censor" the contents of videotapes and albums, she also considers the role corporate conglomeration plays in the process. How much would one expect Paramount Pictures, for example, to protest against Blockbuster's policies, given that they are both divisions of Viacom?

Klein also looks at the workers who keep these companies running, most of whom never share in any of the great rewards. The president of Borders, when asked whether the bookstore chain could pay its clerks a "living wage" wrote that "while the concept is romantically appealing, it ignores the practicalities and realities of our business environment". Those clerks should probably just be grateful they're not stuck in an Asian sweatshop, making pennies an hour to produce Nike sneakers or other must-have fashion items. Klein also discusses at some length the tactic of hiring "permatemps" who can do most of the work and receive few, if any, benefits like health care, paid vacations or stock options. While many workers are glad to be part of the "Free Agent Nation" observers note that, particularly in the high-tech industry, such policies make it increasingly difficult to organise workers and advocate for change.

But resistance is growing and the backlash against the brands has set in. Street-level education programmes have taught kids in the inner cities, for example, not only about Nike's abusive labour practices but about the astronomical mark-up in their prices. Boycotts have commenced: as one urban teen put it, "Nike, we made you. We can break you". But there's more to the revolution, as Klein optimistically recounts: "Ethical shareholders, culture jammers, street reclaimers, McUnion organisers, human-rights hacktivists, school-logo fighters and Internet corporate watchdogs are at the early stages of demanding a citizen-centred alternative to the international rule of the brands ... as global, and as capable of co-ordinated action, as the multinational corporations it seeks to subvert". No Logo is a comprehensive account of what the global economy has wrought and the actions taking place to thwart it. --Ron Hogan

‘A riveting, conscientious piece of journalism and a strident call to arms. Packed with enlightening statistics and extraordinary anecdotal evidence, “No Logo” is fluent, undogmatically alive to its contradictions and omissions and positively seethes with intelligent anger.’ Sam Leith, Observer

‘A fascinating ride through the history of marketing...Klein brilliantly humanises “No Logo” with fascinating personal stories, her voice firm but never preachy, her argument detailed but never obscure.’ Alex O’Connell, The Times

‘Naomi Klein brilliantly charts the protean nature of consumer capitalism, how it absorbs radical challenges to its dominance and turns them into consumer products.’ Madeleine Bunting, Guardian

‘If the world really is just one big global village, then the logo is its common language understood by – if not accessible to – everyone. In “No Logo”, Klein undertakes an arduous journey to the centre of a post-national planet. Starting with the brand’s birth, as a means of bringing soul to mass marketing, she follows in the logo’s wake and notes its increasing capacity for making the product subservient – a strategy reaching its apotheosis in brands such as Tommy Hilfiger, who actually produces nothing but lends his signature to a wardrobe of clothing statements made elsewhere. Beyond this she reaches her core argument – the now uneasy struggle between corporate power and anti-corporate activism – via sweatshop labour, submerged identity and subversive action. Part sociological thesis, part design history, “No Logo”’s message is entirely engrossing and emphatic.’ GQ