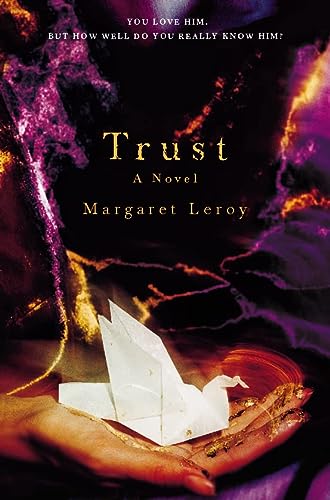 A very contemporary love story, as disturbing as it is absorbing, from a vibrant new voice in women’s fiction.

When Chloe meets fellow social worker Dan she is instantly and powerfully attracted to him. She is divorced, he is still married, but they begin an affair that quickly becomes intense – both sexually and emotionally. Chloe’s children accept Dan without hesitation and when Dan leaves his wife, Helena, and moves into a bachelor flat it seems only a matter of time before a new family unit is formed. But, with brutal suddenness, their lives fall apart, when Dan is arrested on suspicion that he has abused a child in his care.

Vividly charting the eroticism of the start of an affair, its slow, painful collapse under the most intense emotional pressure possible, and two people’s struggle to find new ground between them when their sense of themselves has been fractured by events beyond their control, Margaret Leroy reveals herself as an extraordinary new voice in fiction. Writing with passion, assurance and psychological astuteness and a real ability to convey complex and powerful sexual feeling, this is a book which heralds the start of a glittering career.

Reviews of my book.
"'Trust'" is a sharply plotted, highly readable novel about the invasion of a woman's private life by accusations of crime. Margaret Leroy writes with candour and intelligence, capturing the menace of suddenly finding that the world may not be at all as you've thought it." Helen Dunmore.

"Leroy writes convincingly about the moral conundrums of being in the caring professions. Her book is timely, contributing some thoughtful observations to the wider debate about child abuse." The Times.

"A powerful attraction, a rewarding affair - albeit at the cost of a marriage - and then a dreadful accusation of child abuse in this disturbing tale." The Bookseller.

"Trust" is being published in France, Germany, Sweden, Greece and Holland.

When Dan arrives on Chloe’s doorstep, soaked through and charmingly crumpled, there is an instant attraction between them. She is divorced, he is married, but they are drawn into an affair that quickly becomes sexually and emotionally intense. As Chloe’s children begin to accept Dan and he leaves his wife to move into a batchelor flat, events seem to be rushing to a conclusion. Then suddenly, brutally, their lives are torn apart by an accusation that rocks their relationship to the core.

Vividly charting the eroticism at the start of an affair, the painful collapse of a relationship under the most intense pressure possible and a woman’s struggle to establish the truth at whatever personal cost, Margaret Leroy reveals herself as an extraordinary new voice in fiction. This is a sensuous and disturbing love story, written with passion and assurance.