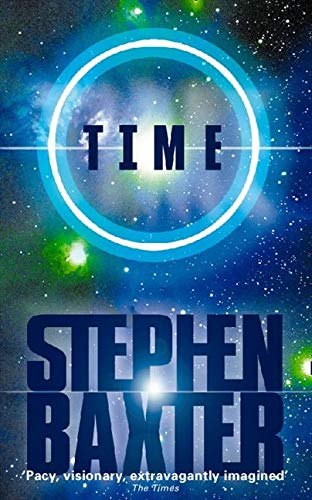 In the millennium’s last great sf novel, Stephen Baxter takes us a short step byond Y2K. The year is 2010. We have survived ... so far.

Cornelius Taine of Eschatology, Inc., mathematical genius, predicts that in just 200 years our species will be wiped out. Even evacuation from Earth will not save us from extinction.

Reid Malenfant, entrepreneur, has Big Dumb Boosters ready to fly from the California desert, to be piloted by an enhanced squid named Sheena 5. When Taine offers Malenfant the ultimate dream of saving the species, Sheena’s mission is diverted to investigate Earth’s recently discovered – and very remote – second moon.

What Sheena 5 discovers there is nothing less than a revelation: the secret reason for our existence visible at last beneath the rippled surface of Time’s river. Malenfant and Taine must follow Sheena... but they are pursued by an enraged US Air and Space Force, and a mighty battle in space may cut short their hopes for the ultimate transformation of mankind.

Stephen Baxter, Britain's foremost author of "hard" SF rooted in real physics, is renowned for thinking big. Time begins with a US entrepreneur's deceptively low-key plans to reclaim space and exploit the asteroids, bypassing NASA's bureaucracy and safety regulations. One bizarre cost-cutting measure: the "Big Dumb Booster" pilot is a genetically enhanced, intelligent squid. Then the mission is redirected following a weird mathematical prediction that humanity hasn't long to live, and a "Feynman radio" transmission from the future that highlights a particular asteroid. Here a space-time gateway opens on unimaginably distant futures, stepping far beyond the dying sun of Wells's The Time Machine to visions of a galaxy reshaped by humanity to hoard its energy ... beyond stars, beyond black holes, beyond even mass. And the emerging message, seen most clearly by a new generation of persecuted, ultra-gifted children, is that this seeming triumph--this total exploitation of our universe's possibilities--isn't good enough. A better path awaits, via a cataclysm that dwarfs mere supernova explosions... Baxter pays homage to the transformations of Clarke's Childhood's End (there's also a nod to 2001), but without the mysticism: it's all respectable, if speculative, physics. His final, devastating payoff makes sequels seem impossible. Two are planned. Rousing stuff, on a cosmic scale. --David Langford

Praise for The Manifold Trilogy:

‘Highly intelligent, with original ideas in almost every sentence’
THE GUARDIAN

‘Baxter is taking basic SF ideas and rebuilding them based on current science, technology and politics ... [He] apparently has the ambition and the energy to reinvigorate hard SF all by himself’
LOCUS