Items related to The Liveship Traders 1: Ship of Magic

The Liveship Traders 1: Ship of Magic 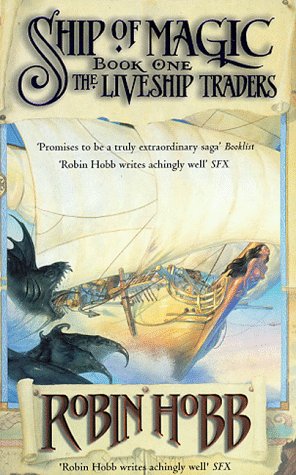 From the author of the classic Farseer trilogy, Ship of Magic is is the first part of the Liveship Traders. Set in a land bordering the Six Duchies, it tells of a group of sea traders, purveyors of rare goods which often border on the magical.

Wizardwood, a sentient wood.
The most precious commodity in the world.
Like many other legendary wares, it comes only from the Rain River Wilds.
But how can one trade with the Rain Wilders, when only a liveship, fashioned from wizardwood, can negotiate the perilous waters of the Rain River? Rare and valuable, a liveship will quicken only when three members, from successive generations, have died on board. The liveship Vivacia is about to undergo her quickening, as Althea Vestrit’s father is carried on deck in his death-throes. Althea waits fo the ship that she loves more than anything else iin the world to awaken. Only to discover that the Vivacia has been signed away in her father’s will to her brutal brother-in-law, Kyle Haven. . .
Others plot to win, or steal, a liveship. The Paragon, known by many as the Pariah, went mad, turned turtle and drowned his crew. Now he lies, blind, lonely and broken on a deserted beach. But greedy men have designs to restore him, to sail the waters of the Rain Wild River once more.

Robin Hobb, author of the Farseer trilogy, has returned to that world for a new series. Ship of Magic is a sea tale, reminiscent of Moby Dick and Patrick O'Brian's Aubrey/Maturin series in its details of shipboard life. It is also a fantasy adventure with sea serpents, pirates and all sorts of magic. The "liveships" have distinct personalities and partner with specific people, somewhat like Anne McCaffrey's Brain ships and their Brawns, though these are trading ships and have full crews.

Hobb has peopled the book with many wonderfully developed characters. Most of the primary ones are members of the Vestritts, an Old Trader family which owns the liveship Vivacia. Their stories are intercut with those of Kennit, the ambitious pirate Brashen, the disinherited scion of another family who served on the Vestritt's ship, and Paragon, an abandoned old liveship believed to be insane. The sentient sea serpents have their own story which is hinted at as well.

Though Ship of Magic is full of action, none of the plot lines is resolved in this book. Readers who resent being left with many questions and few answers after almost 700 pages should think twice before starting, or wait until the rest of the series is out so that their suspense won't be too prolonged. But Hobb's writing draws you in and makes you care desperately about what will happen next, the mark of a terrific storyteller. --Nona Vero

'Hobb is one of the great modern fantasy writers... what makes her novels as addictive as morphine is not just their imaginative brilliance but the way her characters are compromised and manipulated by politics.'
The Times

Praise for The Liveship Traders series:
'Even better than the Assassin books. I didn't think that was possible'
George R R Martin

'Hobb is a remarkable storyteller.'
Guardian

Ship of Magic (The Liveship Traders)