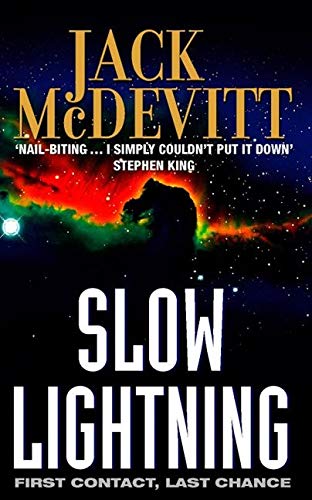 Classic sense-of-wonder sf from the author of THE ENGINES OF GOD.

We are alone in the universe.

We have faster-than-light travel. We’ve been looking for over 1,000 years, and there is simply nothing out there.

The universe is a magnificent, but sterile, wilderness – and it all belongs to us. Maybe we’re lucky.

A new expedition, investigating a mysteriously aborted mission 27 years earlier, is about to turn that wisdom on its head.

Jack McDevitt's debut novel was The Hercules Text in 1986; since then he has published further thoughtful science fiction and the disaster blockbuster Moonfall

Slow Lightning comes with an enthusiastic plug from Stephen King, but is still straight sci-fi, exploring the ever-fascinating theme of alien contact and whether the universe is as empty as it seems.

It's early in the 31st century, life is good, humanity has reached the stars, there are thriving colonies on other worlds and the long, unsuccessful search for alien neighbours is faltering. The last hope, detonating suns as message beacons, is surrounded by both controversy and apathy. Perhaps we have reached our limits and are going into retreat?

But 27 years earlier--as indicated in the prologue--something extraordinary happened, since very carefully covered up. Everyone who returned from a four-person interstellar mission is dead or vanished, leaving only abandoned houses, rumours of ghosts and a model spacecraft of unfamiliar design. McDevitt's attractive heroine Dr Kim Brandywine scents something profoundly odd, and stubbornly investigates even though repeatedly told to stop making waves or lose her job as a fund-raiser for big science. She is enjoyably resourceful, finding talents for trespass, disguise, impersonation, fraud and burglary as she follows a trail leading to a bizarre massacre and to the star Alnitak--where contact with the unknown was shockingly but very humanly bungled.

Despite hair-raising sequences in which Brandywine barely escapes with her life, she still presses on to a satisfying resolution. This is a solid sci-fi thriller with realistic underpinnings. --David Langford

‘The heir to Asimov’
MICHAEL SWANWICK