Items related to CLANS OF THE ALPHANE MOON

Dick CLANS OF THE ALPHANE MOON

CLANS OF THE ALPHANE MOON 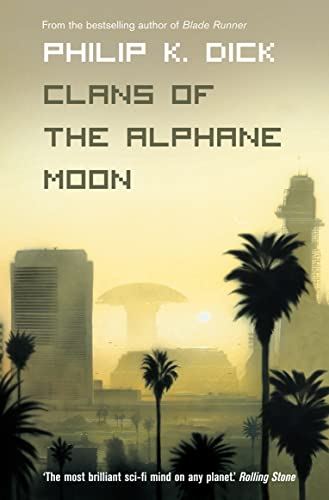 No man in their rightful mind would kill their wife miles from home.

Chuck Rittersdorf has recruited some robot help, and now, in the madness and dysfunction of the Alphane moon, there seems no better place to carry out his cruel plans unless he too is part of a much larger conspiracy.

Alpha Centauri, a star within the closest star system to earth, has several orbiting moons, among which is Alpha III M2. On this remote moon, a colony, originally set up to provide respite for the mentally ill is about to become the focus of a secret invasion plan.

Among them is Chuck Rittersdorf, a 21st century CIA robot programmer, who has decided to kill his own wife via a remote control simulacrum. He enlists the aid of a telepathic Ganymedean slime mould called Lord Running Clam, an attractive female police officer and various others both witting and unwitting.

But when Chuck finds himself in the midst of an interplanetary spy ring on the Alphane moon inhabited entirely by certified maniacs, his personal revenge plans begin to awry as the nature of reality itself is called into question in this brilliantly inventive tale of interstellar madness, murder and violence.

[headline] On a planet where society has fragmented along the lines of citizens mental disorders, the people sent from Earth to take back control might be the craziest of all.

For years, the third moon in the Alphane system was used as a psychiatric hospital. But when war broke out between Earth and the Alphanes, the hospital was left unguarded and the inmates set up their own society, made up of competing factions based around each mental illness. When Earth sends a delegation to take back the colony, they find enclaves of depressives, schizophrenics, paranoiacs, and other mentally ill people coming together to repel what they see as a foreign invasion. Meanwhile, back on Earth, CIA agent Chuck Rittersdorf and his wife Mary are going through a bitter divorce, with Chuck losing everything. But when Chuck is assigned to clandestinely control an android accompanying Mary to the Alphane moon, he sees an opportunity to get his revenge.

PHILIP K. DICK (1928 1982) wrote 121 short stories and 45 novels and is considered one of the most visionary authors of the twentieth century. His work is included in the Library of America and has been translated into more than twenty five languages. Eleven works have been adapted to film, including Blade Runner (based on Do Androids Dream of Electric Sheep?), Total Recall, Minority Report, and A Scanner Darkly."

1. Clans of the Alphane Moon