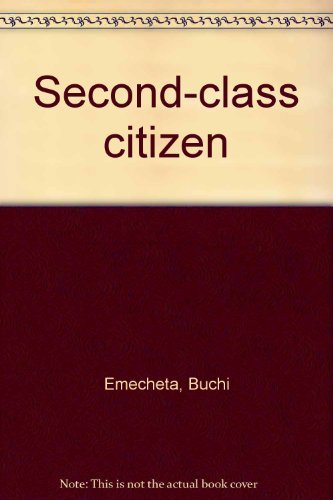 The poignant story of a resourceful Nigerian woman who overcomes the strict tribal domination of women and countless setbacks to achieve an independent life for herself and her children.

"Miss Emecheta's prose has a shimmer of originality, of English being reinvented. . . . Issues of survival lie inherent in her material and give her tales weight."

Buchi Emecheta was born in Lagos in Nigeria. Her father, a railway worker, died when she was very young. At the age of ten she won a scholarship to the Methodist Girls' High School, but by the time she was seventeen she had left school, married and had a child.
She accompanied her husband to London where he was a student. Aged 22, she left him, and took an honours degree in Sociology while supporting her five children and writing in the early morning.
Her first book, 'In The Ditch' details her experience as a poor, single parent in London. It was followed by 'Second-Class Citizen', 'The Bride Price', 'The Slave Girl', which was awarded the Jock Campbell Award, 'The Joys of Motherhood', 'Destination Biafra', 'Naira Power', 'Double Yoke', 'Gwendolen', 'The Rape of Shavi' and 'Kehinde', as well as a number of children's books and a play, 'A Kind of Marriage' produced on BBC television. Her autobiography, 'Head Above Water', appeared in 1986 to much acclaim.

Book Description Paperback. Condition: Very Good. The book has been read, but is in excellent condition. Pages are intact and not marred by notes or highlighting. The spine remains undamaged. Seller Inventory # GOR002121219

Book Description Paperback. Condition: Fair. A readable copy of the book which may include some defects such as highlighting and notes. Cover and pages may be creased and show discolouration. Seller Inventory # GOR001769278

Book Description Paperback. Condition: Good. The book has been read but remains in clean condition. All pages are intact and the cover is intact. Some minor wear to the spine. Seller Inventory # GOR001521638