Items related to My Son, My Son

Spring, Howard My Son, My Son

My Son, My Son 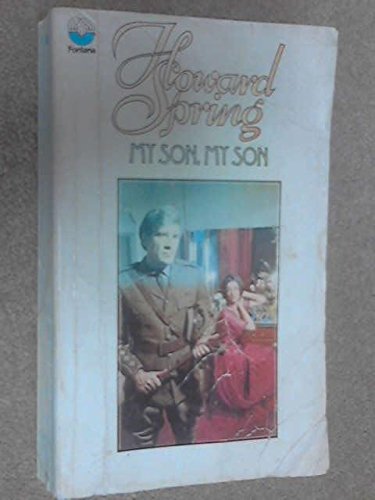 'I liked fetching washing from the Moscrops', and my mother liked washing for Mrs Moscrop better than for anybody else.'

William Essex, a successful dramatist and novelist who overcame his humble beginnings in a Manchester slum, trapped in a loveless marriage, lavishes all his attentions upon his son Oliver. His friend Dermot O'Riordon, a fervent Irish patriot and founder of a great London furnishing house is determined that his son, Rory, should dedicate his life to the cause of Irish independence. One night, these two men voice their pledge to give their sons the youth they could never achieve. But the consequences of this simple desire are more tragic than they could have imagined.

Planned upon a great scale, covering the story of two families for the best part of half a century and mounting with ever-increse and sustained tension this is a book of compelling force from bestselling novelist Howard Spring.

First published in 1938, MY SON, MY SON is British author Howard Spring's multigenerational portrait of a relationship between father and son.

William Essex is the bestselling novelist of his day. Having drawn himself up from humble origins in the slums of Manchester, he now lavishes his son, Oliver, with all he desires. But a father's love should have limits, and William’s actions will have tragic consequences for both of them.

'A vigorous novel of frustrated lives. A story that is remorseless in its insistence on futility; pitiless as life itself' Times Literary Supplement.

Book Description Paperback. Condition: Good. The book has been read but remains in clean condition. All pages are intact and the cover is intact. Some minor wear to the spine. Seller Inventory # GOR001728642

Book Description HarperCollins Distribution Services, United Kingdom, 1970. Paperback. Condition: Fair. A readable copy of the book which may include some defects such as highlighting and notes. Cover and pages may be creased and show discolouration. Seller Inventory # GOR001206271

Book Description -. Paperback. Condition: Very Good. My Son, My Son This book is in very good condition and will be shipped within 24 hours of ordering. The cover may have some limited signs of wear but the pages are clean, intact and the spine remains undamaged. This book has clearly been well maintained and looked after thus far. Money back guarantee if you are not satisfied. See all our books here, order more than 1 book and get discounted shipping. Seller Inventory # 7719-9780006123064

Book Description Fontana 01/06/1970, 1970. Paperback. Condition: Very Good. Shipped within 24 hours from our UK warehouse. Clean, undamaged book with no damage to pages and minimal wear to the cover. Spine still tight, in very good condition. Remember if you are not happy, you are covered by our 100% money back guarantee. Seller Inventory # 6545-9780006123064

Book Description Condition: Good. Ships from the UK. Shows some signs of wear, and may have some markings on the inside. Seller Inventory # GRP86831177

Book Description HarperCollins Distribution Services 1970-06-01, 1970. Paperback. Condition: Very Good. Item is in very good condition. If supplemental codes/CDs for textbooks are required please contact us prior to purchasing as they may be missing. Photos are stock pictures and not of the actual item. Seller Inventory # DS-0006123066-2