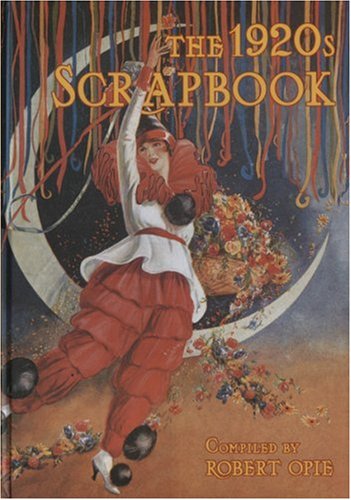 The book has been read, but is in excellent condition. Pages are intact and not marred by notes or highlighting. The spine remains undamaged. Seller Inventory # GOR003749120

With over 1000 colourful images, Robert Opie brings to life the 1920s and captures the mood of this radical decade. The 1920s were a time for change and invention. The arrival of the wireless provided a new form of entertainment and "The Radio Times" was launched in 1923. The popularity of the cinema continued and was changed forever with the coming of "talkies" and "The Jazz Singer" in 1926. While there were many notable events, from the Tutankhamen discoveries to the Empire exhibition at Wembley, unemployment and worker's discontent pervaded everyday life, culminating in the General strike of 1926. For children, however, fun and amusement could be found with new cartoon characters: the antics of Felix the Cat at the pictures, tales of Pooh Bear in Milne's book and, in newspapers, Bonzo the Dog (Daily Sketch), Rupert the Bear (Daily Express), Teddy Tail (Daily Mail) and Pip, Squeak and Wilfred (Daily Mirror). Apart from women daring to smoke, the young "flappers" found freedom in the rising hemlines that revealed their legs and enabled the new energetic dances such as the Charleston and Black Bottom. It was an experimental age for hairstyles, perming, criping, bobbing. No wonder then that this decade became known as the roaring twenties.

Since the 1970s, Robert Opie has amassed an unrivalled collection of packaging and paper materials which are now housed in his museum of packaging in Gloucester. He is the auhtor of numerous publications and has given many talks to schools, as well as on radio and TV.

World of Books is the UKs largest seller of used books online. We sell quality used books at competitive prices to millions of customers worldwide each year. Established by a group of dedicated book lovers, with an ethos to do good, over the past 10 years World of Books has grown to hold over 3 million in stock. We are a circular economy, for profit company that supports charities and protects the planet by enabling more goods to be reused. We do not believe that books should only be read once or have a single owner. By choosing to buy a great value second hand book, you are helping to continually recycle and share the love of literature in rereading and reusing it. Our prices are low to help millions of used books find new homes in over 190 countries worldwide every year. World of Books purchases significant volumes of donated books from UK charities, taking the titles they do not want or have not got space for. Our customers are helping to support good causes too- boosting revenues for charities and saving waste disposal costs. Our business model has generated over Ł12m for charities in the last 5 years. We consider ourselves pioneers in the re-use and recycling of unwanted books, recycling 27,000 tonnes of books each year, equivalent to 500,000 trees. We do our best to provide good quality books but there is no escaping the fact that it has been owned and read by someone else before you. It may well show signs of wear and tear, however each one of our books is hand-checked by our dedicated team for defects before shipping. We hope you enjoy browsing through our titles today.


WorldofBooks.com fully embraces the AbeBooks terms and conditions and we will do
what we can to resolve any issues.